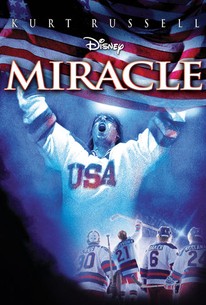 The inspiring story of the team that transcended its sport and united a nation with a new feeling of hope. Based on the true story of one of the greatest moments in sports history, the tale captures a time and place where differences could be settled by games and a cold war could be put on ice. In 1980, the United States Ice Hockey team's coach, Herb Brooks, took a ragtag squad of college kids up against the legendary juggernaut from the Soviet Union at the Olympic Games. Despite the long odds, Team USA carried the pride of a nation yearning from a distraction from world events. With the world watching the team rose to the occasion, prompting broadcaster Al Michaels' now famous question, to the millions viewing at home: "Do you believe in a miracle? Yes!"

Birchana Caldwell
as Girl on Ice

Al Michaels
as Himself

Kim Dryden
as Himself

Jim McKay
as Himself
View All

Believe in the greatness of Kurt Russell.

If you can tolerate all this phony uplift you'll also get a pretty interesting story about a shrewd Minnesota college coach named Herb Brooks.

[T]humbs up for this uplifting and inspirational movie about one of the great upsets in sports history.

An accessible, meticulous, rousing tribute to the legendary game that should both please mainstream audiences and hold up to aficionado scrutiny.

The game remains one of the best moments in sports history. "Miracle" depicts America's spiritual triumph over the Specter of Communism. The implications of this Olympic showdown went far beyond the scope of sports, in the grand scheme of things.

When it comes to inspirational sports films, Miracle is near the top of the list.

Works not just as a sports film, but as an interesting study of relationships strengthened by sports.

Thanks to the folks at Disney we can all relive those magic moments and the story behind them come February 6 with Miracle.

It's all boosted by Kurt Russell who's so great as Herb Brooks.

A story about people rather than just one a team going for the win. In doing so, O'Connor makes Miracle one of the more thoughtful and enjoyable films revolving around sports.

Kurt Russell delivers an astounding performance to shroud the patriotic, nostalgic and cliched feel of Miracle. The film consists of the typical sport-drama vices, but thanks to the leading role, provides inspiration and drama. 4.5/5

The movie that tells the story of the greatest moment in sports history. That moment would be the Miracle on Ice. The reason it's a miracle can't be fully explained unless you were alive in 1980 or you see this movie. (Or just look it up on Wikipedia.) Kurt Russell stars the interpretation of how everything with the 1980 US Olympics hockey team played out. Russell easily the performance of his career in Miracle. He plays Herb Brooks, the head coach of the hockey team and he fits the role perfectly. He could've easily been nominated for an Oscar for his performance but you know, a biased Academy since the beginning of the 21st century. I also have to give props for Gavin O'Connor for his style of directing. During the on ice hockey scenes the cameras are on the ice, right up in the actors faces and you get to feel the intensity of the game. O'Connor also does a great job of making you feel for the characters. When Herb Brooks is angry at the players, you can feel just how pissed he is. When the players feel dejected about a loss or injury, you feel dejected. When they want to jump Herb Brooks and rip his head off...well, you don't feel that because you're always on Brooks's side in this movie. I was also pleasantly surprised at the actors playing the hockey players. Not only were they really good actors, they looked just like the actual players. The director could've easily picked a bunch of bad acting, active NHL players but he chose the more appropriate route. Another thing I liked is they chose to have Al Michaels do the commentary for the games. He was the original commentator for the real games played in the 80's. Every US game he commentates except for the last twenty seconds of the final game. (If you've seen actual footage of the last twenty seconds of the game, you'll understand why. The emotion conveyed is a once in a lifetime kind of thing.) This film has everything a sports movie needs. It's inspiring, emotional, well acted, well directed and shows why people were inspired by the actual event.

"Do you believe in miracles?" Miracle tells the true story of Herb Brooks (Russell), the player-turned-coach who led the 1980 U.S. Olympic hockey team to victory over the seemingly invincible Russian squad.

REVIEW
With a professional and intense performance by Kurt Russell as Herb Brooks, Miracle, the story of the U.S. Olympic hockey team's miraculous win over the vaunted Soviets at the 1980 Winter Olympics at Lake Placid, New York, is by far one of the best true-life sports movies ever made. Russell definitively captures the intensity of Brooks, who in real life just missed the cut on the 1960 Olympic hockey team at Squaw Valley (where the Soviets last lost) and has now been given the task of fielding what the U.S. Olympic Committee wants--the best team of hockey players. But Russell is after something more--like the right team of hockey players, the right combination that will ensure not only competitiveness but also give a winning edge to the squad once the Olympics start. Though he resorts to cajoling, temper outbursts that would nearly rival anything Bobby Knight ever did, and extremely strenuous skating exercises, the team gradually grows to respect him and, in one of the great moments in sports history, Brooks' team defeats the vaunted Soviets 4-3 in the Olympic semifinals, setting themselves up for the subsequent gold medal win against Finland. Aside from Patricia Clarkson (as Brooks' wife) and Noah Emmerich (as Brooks' assistant coach), the main cast of Miracle consists of real-life hockey players, not actors. This adds a great measure of realism to the proceedings, as do the television news flashbacks to a turbulent post-Vietnam America and the Soviet invasion of Afghanistan only two months before Lake Placid. The real-life Herb Brooks, sadly, didn't get to see this film; he passed away shortly after principal photography was completed, and Miracle is thus dedicated to him. He would no doubt have been as proud of what this film accomplished on the big screen as what he and his Olympic squad did on the ice all those years ago.

'Miracle' is no new foray into the genre of sports films, but it is genuinely entertaining, and Russell gives an acceptable performance. The movie borders on cliche material, but it happens to skate by, barely. If you're a sports fan, you'll respect the effort. The nostalgia is fierce, yet the tone feels current. If you don't expect much from your average sports flick, then you're in for a treat. A treat that consists of one of the biggest upsets in sports history