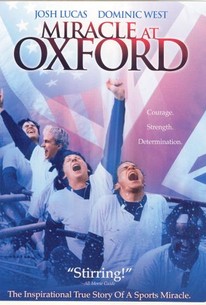 To Oxford University's rowing team, the annual competitive boat race holds more potential glory than the Olympics. When their long-running winning streak is shattered by the skilled Cambridge athletes, the shattered but determined Oxford rowers begin the long and arduous journey to reclaim their title at next year's race. Matters are complicated when the Oxford team's unconventional methods of preparation clash with the long-standing traditions of the Ivy League school, and the rivalry between old and new threatens to sink their chances of victory. If Oxford is to reclaim their title of boat race champion from their fierce archrivals at Cambridge, they must put aside their differences and row harder than ever before to restore the pride of their beloved school.

There are no critic reviews yet for True Blue. Keep checking Rotten Tomatoes for updates!

There are no featured reviews for True Blue at this time.