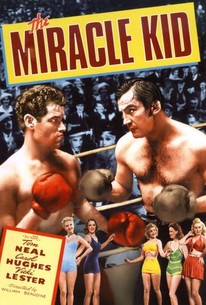 The attractive physiques of Tom Neal and Carol Hughes are generously displayed in the PRC comedy The Miracle Kid. Neal is cast as Jimmy, a young boxer who surprisingly wins a bout with the established champ. The loser claims that he was "jinxed" by Jimmy in the ring, whereupon Our Hero is exploited by a group of health faddists adhering to the philosophy of "mind over matter". Jimmy is subsequently pitted against several "bums" so that the health nuts can prove the vercity of their theories, but in the end he proves that the "secret" to his success lies in his fists and not his subconscious. Carol Hughes costars as Jimmy's sweetheart Pat, who shows up at one point in a form-fitting bathing suit for no reason other than to satisfy the red-blooded males in the audience.

Sam Lufkin
as Referee
View All

Critic Reviews for The Miracle Kid

There are no critic reviews yet for The Miracle Kid. Keep checking Rotten Tomatoes for updates!

Audience Reviews for The Miracle Kid

1941 Black and White 61 Minute film, Its not of the caliper of the big name movies during that time, but its still entertaining. About a boxer and his girlfriend, Its the Typical pre WWII film for the big screen, keep the people happy. Is it worth your 60 minutes, only if your into classic B&W. 3 Stars