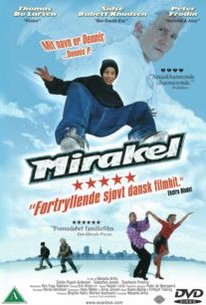 A young boy's tart tongue leads to a visit from one of the most powerful youth counselors of all in this comedy from Denmark. Twelve-year-old Dennis (Stefan Pagels Andersen) is still struggling emotionally after the death of his father, who fell from a roof while dancing for his son. Although Dennis' mother (Sidse Babett Knudsen) looks after him, the boy has been having a rough time, and he's developed the vocabulary of a longshoreman in an effort to seem tough. As Dennis struggles to find satisfaction in life, he's visited by God (Thomas Bo Larsen), who happens to look exactly like his late father. God informs him that his wishes can become realities, but first he has to meet one requirement -- he has to stop swearing so much. Dennis soon learns that this necessity is easier said (or not said) than done. ~ Mark Deming, Rovi

There are no critic reviews yet for Mirakel (Miracle). Keep checking Rotten Tomatoes for updates!

There are no featured reviews for Mirakel (Miracle) at this time.