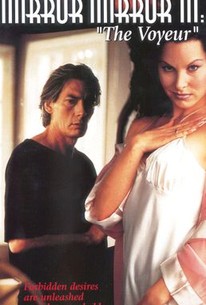 In this erotic thriller, beautiful but mysterious Cassandra (Monique Parent) disappears shortly after her drug-dealing husband Julio (Richard Cansino) is killed in an altercation with police. Cassandra's lover, an artist named Anthony (Billy Drago), moves into the house, and discovers that the place is haunted by Cassanda's spirit, which is trapped inside one of the mirrors. Anthony's presence frees Cassandra, and he discovers that her ghost is just as sexually ravenous as she was in the flesh. However, Cassanda's spirit is also jealous, and when she spies Anthony making love with Carolyn (Elizabeth Baldwin), the influential owner of an art gallery, she becomes furious, leading to lethal repercussions down the road. Mirror Mirror III: Voyeur was co-directed by Virginia Perfili, who served as a producer on the first two films in the series, wrote the screenplay for Mirror Mirror 2: Raven Dance, and played a small role in the original movie.

The Mirror Mirror series has reached its moronic conclusion.

Billy Drago is a great Actor, too bad he takes those bad guy roles. Mirror Mirror 3 was not so bad.