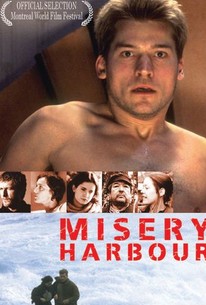 Adapted from the semi-autobiographical fiction of Scandinavian author Askel Sandemose, Misery Harbor concerns Espen (Nikolaj Coster Waldau), an introverted young author in love with a young woman named Jenny (Anneke von der Lippe). Jenny is involved with a literary critic, so, hoping to impress her, Espen asks her to read the manuscript of his first novel. In the novel, the protagonist, much like Espen himself, runs away from the Danish factory town of his birth and finds work on board a British ship, where he meets Wakefield (Stuart Graham), an ill-tempered ne'er-do-well. Wakefield is determined to make Espen's life miserable at every opportunity, and when Espen jumps ship in Newfoundland and begins to court Eva (Margot Finley), Wakefield is on hand to spoil that as well. Misery Harbor was the first in a series of films co-produced by Canadian and Norwegian production companies.

There are no critic reviews yet for Misery Harbour. Keep checking Rotten Tomatoes for updates!

There are no featured reviews for Misery Harbour at this time.