Miss Castaway and the Island Girls (2004) 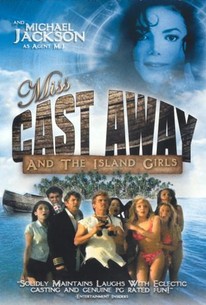 In this frantic satiric comedy, Maximus Powers (Eric Roberts) and Mike Saunders (Charlie Schlatter) are a pair of airline pilots who are flying a chartered jet to Japan, booked for the contestants in the Miss Galaxy Beauty Pageant. Bad luck is following them and the pilots crash-land on a deserted island, where they struggle to find a way to ferry themselves and the glamour girls back to civilization. However, things on the island are hardly as quiet as they might imagine, as they soon discover its home to a gigantic half-pig, half-dinosaur; a tribe of intelligent ape people; and the remnants of Noah's Ark. As Powers and Saunders plot their next moves, they are recruited for an unusual mission by Special Agent MJ (Michael Jackson), who appears as a giant light in the sky. By the way, that really is Michael Jackson the pop singer appearing in a cameo role; other guest stars include Stuart Pankin, Evan Marriott, and Colleen Shannon.

Critic Reviews for Miss Castaway and the Island Girls

It's fish in a barrel. Just trust me when I warn you never to rent, buy, or even discuss this mindless cinematic abomination.

It is one of the most excruciating cinematic experiences of my life.

This is a complete and utter disaster all around, one that should be avoided at all costs...

Audience Reviews for Miss Castaway and the Island Girls

There are no featured audience reviews yet. Click the link below to see what others say about Miss Castaway and the Island Girls!