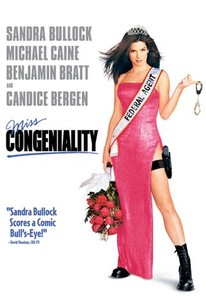 Critics Consensus: Though critics say Bullock is funny and charming, she can't overcome a bad script that makes the movie feel too much like a fluffy, unoriginal sitcom.

Critics Consensus: Though critics say Bullock is funny and charming, she can't overcome a bad script that makes the movie feel too much like a fluffy, unoriginal sitcom.

Critic Consensus: Though critics say Bullock is funny and charming, she can't overcome a bad script that makes the movie feel too much like a fluffy, unoriginal sitcom.

Ellen Schwartz
as Herself

Pleasant and entertaining; for teens and older.

While there may not be many surprises, there's little to dislike either.

Unless you think it's a riot to watch Bullock fall over herself repeatedly in high heels, this Miss is a mess.

If you're expecting action and comedy, you'll find this film has little of either.

A genuine crowdpleaser boasting a charming star turn, Miss Congeniality is indeed difficult to dislike, but hey, sometimes it's worth the effort.

Here's Sandra Bullock doing what she has always done - playfully splashing about in the middle of the mainstream. Those who enjoy a little mindless diversion won't mind getting wet once again.

Its story is far from logical, let alone realistic, yet we laugh and completely buy into the fun.

Bullock's talent for gentle farce is not enough to carry her here; there are only so many times she can get a laugh out of stumbling in her high heels and talking with her mouth full.

Sandra Bullock (who also produces) takes a lame idea of a script, splashes her considerable allure all over it, and comes away with an amiable, light-hearted holiday charmer.

Basically, this is like a really bad film from the eighties, that seems to be remade with Sandra Bullock digitally grafted onto the horrible plot.

Miss Congeniality isn't awful, but it isn't utterly entertaining or incredibly original either, it's just right in the middle.

Amazingly good. I could hardly believe I liked it so much this time around. Caine is terrific, and as I said when I commented on The Blind Side, even this one would have been a better choice for her Best Actress nomination. I just watched this again for the first time in many years, and it holds up very well. This is really the kind of role where Bullock excels.

I more or less like what this movie represents or could have been rather than what it actually is. Like, the concept of a kickass FBI agent entering a beauty pageant and finding out the true meaning of femininity is actually quite fascinating, but the film just doesn't deliver. I guess I'm not that huge of a Sandra Bullock fan.

bullock's eyes are too small, she is too skinny, and i don't know if she can act at all...so why does this creature charm me no matter what she's in??? she's the sickly cat you breakdown and finally decide to feed at your back door somehow...i really like her, i do