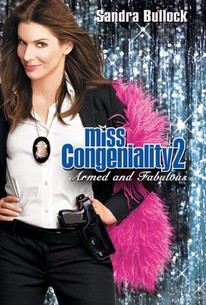 Critics Consensus: Sandra Bullock is still as appealing as ever; too bad the movie is not pageant material.

Critics Consensus: Sandra Bullock is still as appealing as ever; too bad the movie is not pageant material.

Critic Consensus: Sandra Bullock is still as appealing as ever; too bad the movie is not pageant material.

FBI agent-turned-reluctant beauty queen Gracie Hart (played by Sandra Bullock) is taking on both bad guys and high glamour again in this sequel to the comedy smash Miss Congeniality. After her undercover mission at the Miss United States pageant becomes public knowledge, Gracie becomes something of a celebrity, and the FBI uses her notoriety to generate positive PR for the bureau; however, Gracie would like to get back to some solid police work, especially after scuffling with fellow female agent "Sam" Fuller (Regina King), who isn't impressed with Gracie. Despite their differences, the two find themselves working side by side when two of Gracie's pals from the pageant -- contest winner Cheryl Frasier (Heather Burns) and master of ceremonies Stan Fields (William Shatner) -- fall victim to kidnappers. As she did on the first film, Sandra Bullock served as both producer and star for Miss Congeniality 2: Armed and Fabulous, while director John Pasquin's credits include several episodes of the situation comedy George Lopez, also produced by Bullock. ~ Mark Deming, Rovi

Dolly Parton
as Herself

Leslie Grossman
as Pam
View All

Whether back in her ill-fitting suit, sunglasses and sensible shoes or strutting around in a showgirl outfit so canary yellow you'd swear she was Big Bird, Bullock is wonderful, illuminating [things] with superstar sass singularly her own.

This, to me, is a classic example of a sequel that was just made because the first one made money. I didn't even like the first one.

Like its predecessor, Miss Congeniality 2 is by turns a predictable and outlandishly contrived take on the Pygmalion myth.

Miss Congeniality 2: Armed and Fabulous is enjoyable in patches, but only because of the goodwill that most of us still have toward Sandra Bullock.

The storyline goes from playfully silly to seriously stupid. And the occasional laugh becomes a regular groan.

Could it really have taken four years to come up with [this]story.

Takes an interesting concept -- a female buddy picture -- and wastes it, opting instead for clichéd fish-out-of-water humor and silly costumes.

There is a bit of a lesson about identity and self-worth imparted here, but it's muddled at best. Who has two hours to waste watching this movie?

Not as good as the first film but still very funny!

it was okay. C

I was excited to watch Sandra Bullock's return as FBI agent Gracie Hart in this sequel comedy movie, but I thought it was OK. Not as clever and original as the first, but still very entertaining. The second had a lot more laughs, slapstick, and funny bits...however I'd say it lacked in plot. I was a bit disappointed with the cast (especially Benjamin Bratt not returning), but Bullock was the best. Bullock dressed as the old woman is hilarious and there are many other great costumes as well as how beautiful she looked.