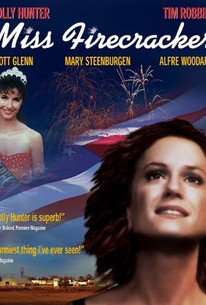 Miss Firecracker is the streamlined title of the film version of Beth Henley's play The Miss Firecracker Contest. Holly Hunter plays a Mississippi girl whose sole reason for being is to enter beauty contests. Unfortunately, Holly's reputation for promiscuity is too well known in Yazoo City for her to be considered a serious contender for the "Miss Firecracker" competition. In the days before the contest, Holly attempts to rally around her those people who might enable her to win, including her cousin and idol, former "Miss Firecracker" Mary Steenburgen. The characters veer dangerously close to caricature at times but the film works for the most part, thanks to the virtuoso vitality of Holly Hunter. Watch for director Thomas Schlamme's real life wife (Christine Lahti) and child in a fleeting cameo appearance.

Ultimately, Miss Firecracker is a sweet celebration of humanity, of just plain folks trying to get by.

A neglected gem with sensational performances by everyone, especially Steenburgen and Woodard.

What finally makes Miss Firecracker special is that it is not about who wins the contest, but about how all beauty contests are about the need to be loved and about how silly a beauty contest can seem if somebody really loves you.

A gentle, off-beat satire that characterizes a bunch of Southern oddballs striving for acceptance.

Miss Firecracker is a huge cotton candy of a movie -- there's not really much there; but it's gaudy to look at, and sweet going down the gullet.

Warmly human film based on Beth Henley's 1984 play. It will appeal to those who long for liberation from bad dreams and yearn for a place where they can be accepted for who they are.

Hunter is great, but the story works better on stage

Two big names, Holly Hunter and Tim Robbins, unfortunately do not save this boring piece of lackluster storytelling (based on a play), except perhaps Tim Robbin's character defending his sister's honor at the judging pageant towards the end.