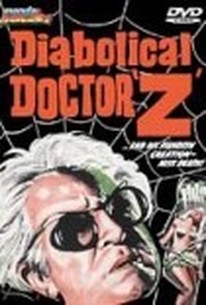 This dark, surrealistic horror film from cult filmmaker Jesus Franco is perhaps best-remembered for its images of the lethal Miss Muerte (Estella Blain) luring victims with razor-sharp fingernails while clad in a skull-mask and a revealing bodysuit. The real star of the film is Mabel Karr, portraying Irma von Zimmer, daughter of a mad scientist whose public humiliation led to his fatal heart attack. Vowing revenge, Irma uses her father's mind-control techniques to possess Miss Muerte, a nightclub performer. The hypnotized dancer murders the doctors whom Irma blames for her father's death, slicing their throats with her poisoned nails, until police Inspector Tanner (Franco) and Miss Muerte's boyfriend (Fernando Montes) track her down. One of Franco's most entertaining films, Miss Muerte is a great improvement over the similar El Secreto del Dr. Orloff, released the previous year. ~ Robert Firsching, Rovi

Critic Reviews for Miss Muerte (Miss Death and Dr. Z in the Grip of the Maniac) (The Diabolical Dr. Z)

There are no critic reviews yet for Miss Muerte (Miss Death and Dr. Z in the Grip of the Maniac) (The Diabolical Dr. Z). Keep checking Rotten Tomatoes for updates!

Audience Reviews for Miss Muerte (Miss Death and Dr. Z in the Grip of the Maniac) (The Diabolical Dr. Z)

This was the first Franco flick I've seen and I've got to say I was impressed. I would love to see what Diabolical Dr. Z would've looked like in color, but it likely would've killed the atmospheric qualities of the movie. The Miss Death sequence was great (and hot in an odd way) as was the hallway fight towards the end. This was a very pleasant surprise and a very fun watch.

Miss Muerte (Miss Death and Dr. Z in the Grip of the Maniac) (The Diabolical Dr. Z) Quotes