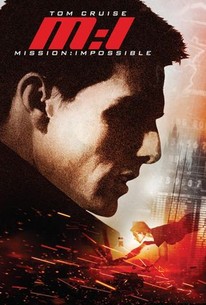 Critics Consensus: Full of special effects, Brian DePalma's update of Mission: Impossible has a lot of sweeping spectacle, but the plot is sometimes convoluted.

Critics Consensus: Full of special effects, Brian DePalma's update of Mission: Impossible has a lot of sweeping spectacle, but the plot is sometimes convoluted.

Critic Consensus: Full of special effects, Brian DePalma's update of Mission: Impossible has a lot of sweeping spectacle, but the plot is sometimes convoluted.

After he is framed for the death of several colleagues and falsely branded a traitor, a secret agent embarks on a daring scheme to clear his name in this spy adventure. Though it drew its name from the familiar television series, director Brian DePalma's big-budget adaptation shares little more with the original show than the occasional self-destructing message and the name of team leader Jim Phelps (Jon Voight). The film focuses not on Phelps but his protégé, Ethan Hunt (a reserved Tom Cruise), who becomes a fugitive after taking the blame for a botched operation. He responds by banding together with a group of fellow renegades, and he is soon maneuvering his way through a twisted series of double crosses that mainly serve as excuses for spectacular high-tech action sequences. Much of the activity revolves around a missing computer disk, with the film's most famous scene depicting Hunt's delicate efforts to retrieve the disk from a secure, well-alarmed room in CIA headquarters. ~ Judd Blaise, Rovi

David Phelan
as Steward on Train

The "set" pieces of this film come off like clockwork, but there's no connective tissue -- no story line, no solid characterization, etc. In the end, De Palma's work seems full of sound and visual fury without signifying much of anything.

De Palma has a choppy, episodic sense of story, and he crafts individual scenes rather than telling a single unified story.

The most dour, sexless piece of escapism in memory.

Unlike most action films, Mission: Impossible's distinct appeal operates not so much on suspense but on improbability.

Despite the snags, De Palma remains a virtuoso puppet-master, pulling the strings taut in a nail-biting robbery sequence, switching from micro to macro with Hitchcockian panache, and finally letting rip with a hell-for-leather climax.

The first installment in the popular film franchise set the tone for what would be a consistently exciting series (that dopey M:I II aside).

While Mission: Impossible isn't the best film in the franchise, it lays the foundation for everything that will come our way in the future.

Thanks, in part, to Cruise, the Mission: Impossible film franchise has grossed $3.5 billion to date with more to come...

A production designed to entertain and to do it in such a way that the viewer remains glued to the seat with De Palma's visual and narrative inventiveness. [Full Review in Spanish]

There are some standout action sequences, and that's what really makes it worth a look back.

Revisiting the first M:I film now with its portrayal of the early internet stages feels like watching cavemen trying to make fire. The agent thriller aspects of the film still work, DePalma knows how to direct a film, of course. They are oddly contradictory to the action scenes, though, making for an very strangely timed film. The iconic break-in to the CIA headquarters stands the test of time, the over the top finale with the CGI helicopter less so. Let's put it this way: after this and the mediocre second part the series got better and better.

The first and still by far my favorite entry in the Mission Impossible franchise. The action is great (Who can forget the iconic vault sequence), DePalma's direction is tight and classy, and the plot (while admittedly a bit convoluted) is full of great twists and turns.

While this film hasn't aged well, (especially when it comes to its use of computer technology), there is a reason that it is a classic action film, and has now spawned four sequels, the latest of which will be in theaters this year. Tom Cruise is probably the best action star of the past twenty years, mainly because he does his own stunts, even in an age where CGI is replacing a lot of stunt doubles. While this is saving many stunt people from injuries, the action looks fake and lowers the stakes for the audience. Tom Cruise is doing everything that you see onscreen. The scene in the vault is still relevant today because it looks and feels real for the audience. Iconic imagery from this film is still referenced today, and has informed many modern action films, probably making it the most influential action film of the decade, besides "The Matrix." The stakes of the first film revolve around the identities of a secret government agency, and Ethan Hunt (Cruise) is framed in a worldwide conspiracy. Hunt is almost completely alone in his quest to clear his name and help his other agents keep their secrecy intact. While many aspects of this film are still impressive today a lot of this does not have the same impact that it had nearly twenty years ago. Luckily the sequels are of the same caliber and incorporate modern technology and stunts.