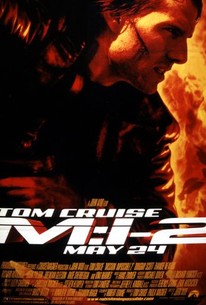 Critics Consensus: Your cranium may crave more substance, but your eyes will feast on the amazing action sequences.

Critics Consensus: Your cranium may crave more substance, but your eyes will feast on the amazing action sequences.

Critic Consensus: Your cranium may crave more substance, but your eyes will feast on the amazing action sequences.

Director John Woo brings Hong Kong-style martial arts action to this comic book-flavored sequel that eschews the complicated plot and political maneuverings of its predecessor in favor of pure, adrenaline-charged thrills. Tom Cruise returns as Ethan Hunt, an operative for the top-secret government agency IMF (Impossible Missions Force). Fellow agent Sean Ambrose (Dougray Scott) has gone rogue, stealing a sample of a deadly synthetic virus named Chimera that could rapidly wipe out the world's population. Ambrose's plan is to sell Chimera to the highest bidder in exchange for shares of stock in the winner's company. Summoned by the new IMF chief (Anthony Hopkins in an uncredited cameo role), Ethan is assigned to recruit the help of Ambrose's former lover Nyah Nordoff-Hall (Thandie Newton), a gorgeous woman who left Ambrose broken-hearted and who may be able to quickly regain his confidence. Once he meets and spends a night with Nyah, however, Ethan is smitten, and now must both capture Ambrose and keep Nyah alive as she infiltrates a nest of vipers. Sophisticated disguises, gun battles, and high-speed chases are the order of the day, very much in the James Bond mold. Mission: Impossible 2 is based on a story by Star Trek: The Next Generation writers Ronald D. Moore and Brannon Braga, with a script polish by Robert Towne. ~ Karl Williams, Rovi

Nicholas Papademetriou
as Prison Guard No. 2

Kelly Ons
as Flamenco Dancer No. 1

Natalie Reis
as Flamenco Dancer No. 2

Nada Rogic
as Flamenco Dancer No. 3

Cristina Brogers
as Flamenco Dancer No. 4

Adriana Rodríguez
as Flamenco Dancer No. 5

Sandra Rodriguez
as Flamenco Dancer No. 6

Candice Partridge
as Flamenco Dancer No. 7

Newton is just about the best thing about M:I-2, playing a thinly written and cryptically motivated character with such charisma that one hangs on every lifting eyebrow and seductive smile.

"M:I-2," as the new Mission: Impossible is tagged, is a slick, expensive, bullet-ridden thriller that is oddly dull -- the last thing you'd expect.

Good thrill ride of a movie for teens and older.

Woo lays on his own particular high-octane stylishness so thick the results edge perilously toward self-parody.

If the first movie was entertaining as sound, fury and movement, this one is more evolved, more confident, more sure-footed in the way it marries minimal character development to seamless action.

For all my profound reservations about the whole project, I wound up liking it more, or, at least disliking it less, than I had anticipated. Thandie Newton is the biggest reason.

A film that remains eternally fascinating, particularly as the demonstrable nadir of, otherwise, one of cinema's most consistently entertaining blockbuster franchises.

The prolonged excess of a climax that is made even longer by the incessant inclusion of slow motion seems to want to compensate for the practical nonexistence of the action in more than half of the footage. [Full Review in Spanish]

It's fairly disappointing to note, ultimately, that Mission: Impossible II rarely comes close to replicating the consistent thrills and excitement of its vastly superior predecessor...

John Woo's summer blockbuster is surely the most elegant and graceful example of cinema's technology advanced comeuppance so far.

Watch it for completionist-sake ... but in a series with very self-contained entries, (this film) isn't really necessary or recommended.

Not a bad movie if you are just looking for great action but mentally it's hard for me to accept this movie as a sequel to the original because it feels too atheistically and tonally different. Heck, it feels that way even compared to the movies that came afterwards. Where the original DePalma classic aimed for a classy Hitchockian presentation, MI 2 (Helmed this time around by action movie legend John Woo) is more in keeping with over-the-top James Bond films of the 90's...except more EXTREME!!! (Needless to say, this entry has not aged quite as well as it's predecessor) Okay, I won't mince words, the story is ultra-silly and over-the-top. That's to be expected from John Woo, who is the King of over-the-top, except here it goes too far at times, especially in the film's draggy third act complete with a drawn-out motorbike chase and Street Fighter-esque acrobatic fights. Decent viewing if you are just looking for great action, but otherwise this is arguably the most skippable entry in the MI franchise.

Ethan Hunt recruits the skills of a beautiful jewel thief to recover a lethal virus that was stolen by a rogue IMF agent. Brian De Palma's attempt to make a more adult spy movie in the original Mission Impossible is jettisoned in favour of the usual Hollywood blockbuster histrionics and to be fair, MI: 2 has dated rather better as a result. It plays out very much like its contemporary Bond films and a gorgeous Thandie Newton conjures some pretty decent chemistry with Cruise in the early scenes of the film. In fact John Woo shows some unusual restraint for the first two acts and his trademark stylised action works extremely well for an exciting research facility heist. Dougray Scott also makes a suitably Machiavellian villain as "Dark Ethan" and it all shapes up to be an enjoyable if silly action movie. Unfortunately things take a decided turn for the worse during the climax as Woo succumbs to his worst excesses for an uncomfortably bloated finale which degenerates into complete nonsense. The action becomes so overblown and incessant it becomes increasingly tedious rather than exciting and the emotional button pushing is done encased within a concrete boxing glove. This all culminates in an absurd acrobatic smackdown between Cruise and Scott that resembles a drearily drawn out round of Tekken. A shame really, because up until that point it was really good fun but it still stands up as a brainless but fun instalment that's probably the second best of the series after Ghost Protocol thanks to its willingness not to take itself too seriously.