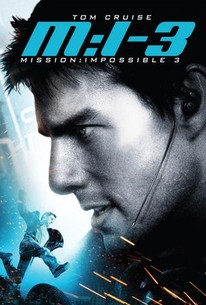 The third entry in Tom Cruise's Mission: Impossible film series involves super Impossible Mission Forces (IMF) agent Ethan Hunt (Cruise) being forced back into the field just when he was planning on marrying his girlfriend, Julia (Michelle Monaghan). The agency asks Hunt to save an operative (Keri Russell) he trained after weapons dealer Owen Davian (Philip Seymour Hoffman) kidnaps her. With the help of his field team -- played by Ving Rhames, Jonathan Rhys-Meyers, and Maggie Q -- Hunt achieves his goal, but becomes involved in a web of double-crosses that leave him wondering if he can trust his superiors (Billy Crudup and Laurence Fishburne). Eventually Davian threatens Julia's life in order to get away with his evil plan. Simon Pegg appears as an IMF tech expert. ~ Perry Seibert, Rovi

...this snappy installment is a marked improvement over John Woo's surprisingly dull sequel, though the set pieces lack the elegance and visual coherence of the Brian de Palma original.

There are plentiful perilous countdowns, most of the set-pieces are impressively mounted and, in its own silly way, the pay-off offers a glancing blow at US foreign policy. Relatable? No. But quite fun.

The summer's first action epic does exactly what it's supposed to do, more clearly than M:i:I, and more likeably than M:i:II.

As idiot movies go, this one is as sub-mental as you might expect.

My final reaction to Mission: Impossible III is one of bemused tolerance and even mild absorption in all the silliness.

Interfering with what would otherwise suffice as popcorn pleasures, a jolt of "Law and Order"-style ripped-from-the-headlines electricity throws the movie fatally off-kilter.

'Mission: Impossible III' is a 100% J.J. Abrams film with all the (very) positive and the (little) negative that this implies, of course. [Full Review in Spanish]

Mission: Impossible III kicks off with an in-media-res opening that effectively establishes the stakes and the decidedly vicious bent of Hoffman's maniacal villain...

Director J.J. Abrams stages one impressive action sequence after another, giving fans of the franchise exactly what they would expect.

It's the relationships and crafted actions sequences that kept me glued. It's not perfect by any means, but hands-down, this was the best entry of the first three to me.

The best of the first three for its nonstop action and sometimes pulse-pounding excitement.

I hate these stupid movies.

Not nearly as good as the first but I definitely prefer this to the second one. Once again the plot is nothing mind-blowing (I guarantee you'll forget about it minutes after watching) but the action will surely impress (my favorite being the harrowing bridge scene and the humorous Vatican break-in) and I like that there is more of a focus on the Impossible Mission Force team instead of just a pure Tom Cruise-vehicle. Plus having Simon Pegg never hurt manners. Plus props to Philip Seymour Hoffman for being able to turn an overall generic stock spy movie bad guy and instill an intimidating and unsettling presence. What a great actor!!