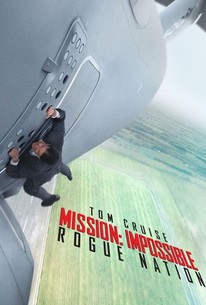 With the IMF disbanded, and Ethan (Tom Cruise) out in the cold, the team now faces off against a network of highly skilled special agents, the Syndicate. These highly trained operatives are hellbent on creating a new world order through an escalating series of terrorist attacks. Ethan gathers his team and joins forces with disavowed British agent Ilsa Faust (Rebecca Ferguson), who may or may not be a member of this rogue nation, as the group faces their most impossible mission yet.

Solomon B Taiwo
as Passer By

Tony Paul West
as Suspect at the Opera

Vauxhall Jermaine
as US Marine Jones

In the beginning you'll think something is missing from Mission: Impossible-Rogue Nation. Excitement. Audacity. Edge. Visual splendor. Be patient. In it's own way, this action/thriller eventually gets the job done.

If Jason Bourne is our most brooding spy and James Bond is our suavest, then IMF agent Ethan Hunt is our most intense, the one most willing to do whatever it takes to get the job done. Sound like anyone we know?

First-rate popcorn, a meticulously devised and elegantly executed spy movie that manages to thrill with its stunts, jangle with its set pieces, land a laugh or two, and not insult our intelligence

With Mission: Impossible - Rogue Nation, we're getting the best Bond movie since Casino Royale in 2006.

Rogue Nation is terrific fun, the best action movie of the summer without Mad Max in the title. It's also, arguably, the best Mission: Impossible movie, impressive for the fifth installment in any movie series.

Rogue Nation is a 131-minute roller-coaster ride that slows down long enough for you to catch your breath before jettisoning you into another gasping round of action and adventure.

I'm quite the sap for action films. I like the fast paced, heart-stopping sequences. Rogue Nation does not disappoint.

Funnier and with a more linear storyline than previous entries, the movie's mission is to entertain, and in that it succeeds.

It reminds us that "summer blockbuster" doesn't have to be a dirty word, but can be an extremely satisfying and engaging time at the movies.

With good guy swagger and that ever present smile, Cruise once again defies the haters and proves that he's got everything under control.

This breathtaking movie is possibly the finest and most well-constructed installment in this franchise so far, with an intelligent espionage plot, fantastic editing (I could even swear that Brian De Palma directed that splendid opera scene) and exhilarating action scenes.

Pretty boring, honestly. Confusing and dumb action scenes. And it needs to be half an hour shorter. Not my type of thing at all.

A burst of celluloid adrenaline, "M:I - Rogue Nation" is thrilling from beginning to end without sacrificing story. This time around, Ethan Hunt and his crew are on the run from the CIA, following disbandment as he tries to prove the existence of the Syndicate, an international criminal consortium. Like usual, Tom Cruise fully commits to his portrayal of Ethan Hunt and in "Rogue Nation" manages to astound with his commitments to stunts and an occasional well-placed zinger. His supporting team gels excellently with Cruise, but this time around it's Rebecca Ferguson that breaks out and almost steals the movie with her seductive, athletic portrayal. "Rogue Nation" continues the "M:I" renaissance with thrilling results.