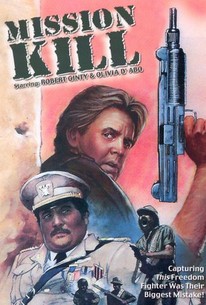 Robert Ginty, star of James Glickenhaus's The Exterminator (1980), returns for a similar outing in the 1985 actioner Mission Kill. He plays Cooper, an explosives expert summoned by a Green Beret friend Harry (Cameron Mitchell), on a mission to smuggle arms into the (fictional) South American country of Santa Maria. The picture co-stars Merete Van Kamp and Harry Darrow.

Louis Waldon
as Tourists at Border

Katie Barry
as Tourists at Border

David Kaufman
as Glenn
View All

There are no critic reviews yet for Mission Kill. Keep checking Rotten Tomatoes for updates!

There are no featured reviews for Mission Kill at this time.