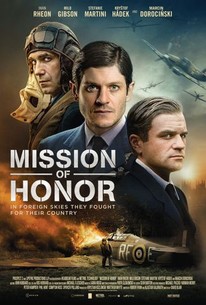 Mission of Honor is the story of a group of brave Polish pilots known as Squadron 303 who fought in the skies over England in WW2, not just to keep Great Britain free from the Nazis, but also to keep alive the very idea of their own country, which had existed in its modern form for barely twenty years before it was crushed between the opposing jaws of Germany and Russia. Equipped with the almost-obsolete Hurricane airplane and RAF blue uniforms, they fought and Poland lived.

Critic Reviews for Mission of Honor

It's an old-fashioned boy's own tale, with the accent on boys - an attempt to widen the focus to the women working behind the scenes backfires slightly...Still, the story of the Polish pilots deserves to be told.

Director David Blair navigates the whole thing through the storm with watchable competence.

A niche film for World War II buffs, Polish patriots and air display patrons. Not exactly subtle, but few war films are - and it's hard not to get caught up in fighting these old battles.

An entertaining gloss on real history and a pretty good digital updating of the WWII aerial combat thriller.

Delivering plenty of tears and triumph before tea time (albeit with a nasty true-life sting in its final text summary), Hurricane could just have benefited from a slightly tighter focus.

Rheon makes a persuasive lead as pilot Jan Zumbach despite having to perform half of his lines in subtitled Polish.

I enjoyed the performances from Iwan Rheon and Stefanie Martini, but extraordinarily clunky CGI and the reliance on the old "I'll translate this crazy Englishman as saying something humorous" got tiring quite quickly.

Audience Reviews for Mission of Honor

There are no featured audience reviews yet. Click the link below to see what others say about Mission of Honor!