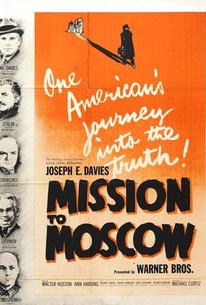 The life and times of American ambassador to Russia Joseph Davies provide the basis of this pre-Cold War, pro-Soviet drama that is based on Davies' autobiography. Featuring many positive glimpses of Soviet life (something many Muscovite audiences found hilarious), and beautiful on-location photography, much of the story centers on the Diplomat's encounters with Stalin and Molotov. The real Joseph Davies introduces the film.

Emory Parnell
as Speaker of House

Arthur Loft
as Man with Microphone

Wallis Clark
as Well-wisher with Bill

Barbara Brown
as Well-Wisher at Train

Gregory Golubeff
as Commandant of the Court

William B. Davidson
as Senator

John Maxwell
as Reporter at Train

Critic Reviews for Mission to Moscow

Curtiz' superproduction deserves to be far better known as the supreme example of haute Hollywood craftsmanship deployed for the sort of propaganda commonly associated with films from the Soviet Union and other totalitarian regimes.

Audience Reviews for Mission to Moscow

There are no featured audience reviews yet. Click the link below to see what others say about Mission to Moscow!