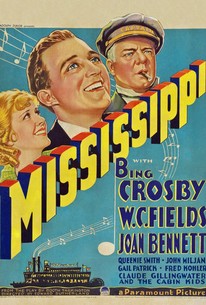 In this musical comedy, W.C. Fields teams up with Bing Crosby to offer yet another take on the genteel lives of wealthy Southerners before the Civil War. Fields plays the wily owner of a showboat while Crosby plays a Yankee who becomes a society pariah for refusing to duel for a Southern belle's affections. Forced to flee by the disgrace, the Yankee becomes a singer on Field's sternwheeler. More trouble follows when Crosby has a heated argument with the ship's captain Fred Kohler. During the ensuing scuffle, Kohler is accidentally killed causing the ever-opportunistic Fields to begin billing Crosby as "the Singing Killer." This causes Crosby no end to romantic repercussions. Fortunately, by the story's end, he has proved himself a decent man and wins the heart of his new lady love, the sister of the belle who originally spurned him. Songs include the Rogers & Hart penned hits: "Down by the River," "Easy to Remember but So Hard to Forget" and "Soon."

Lew Kelly
as Man at Bar

Matthew Betz
as Man at Bar

Bill Howard
as Man in Auditorium

Jan Duggan
as Passenger on Boat

Helene Chadwick
as Extras at Opening

Jerome Storm
as Extras at Opening

Jacqueline Molasses
as Himself

Jean Rouverol
as Friend of Lucy

Forrest Taylor
as Man at Bar Who Orders Sarsaparilla

Warner P. Richmond
as Man at Bar Who Pulls a Gun

Mississippi is a pleasant, leisurely picture that doesn't worry much about getting anywhere, but just keeps rolling along.

There are no featured audience reviews yet. Click the link below to see what others say about Mississippi!