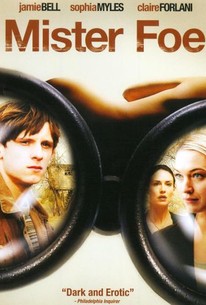 Critics Consensus: Carefully balanced between the dark and the dreamy, Mister Foe is a charged coming-of-age story with whimsy and bite.

Critics Consensus: Carefully balanced between the dark and the dreamy, Mister Foe is a charged coming-of-age story with whimsy and bite.

Critic Consensus: Carefully balanced between the dark and the dreamy, Mister Foe is a charged coming-of-age story with whimsy and bite.

Jamie Bell's performance as a lonely Scottish teen rings true in this poignant, yet humorous, coming-of-age tale. He plays Hallam Foe, who runs away to Edinburgh and meets a beautiful hotel worker (Sophia Myles) who looks like his late mother, who committed suicide. Claire Forlani costars as his stepmother, whom he believes actually killed his mom. Ciaran Hinds, Ewen Bremner, Ruth Milne. Directed by David Mackenzie, who co-wrote the script with Ed Whitmore. Also known as "Hallam Foe."

Jamie Bell, who plays the title character in the new film Mister Foe, is the next Christian Bale. At least.

Bell was a decent kid actor and a terrific dancer in Billy Elliot, but he's grown into a really first-rate actor.

It's a coming of age you can believe in.

While the film playfully telegraphs its inspirations, Mister Foe never persuasively comes together as a dark fable about an adolescent misfit stuck in loss.

Has a strange kind of charm, a warm, open disposition that even in its darkest moments, we always pull for Hallam.

Hallam Foe does quite a few rather nasty things, but Mr. Bell's engaging and empathetic performance makes him a character we can't stop caring about.

it's ultimately impossible to rise above the overly melodramatic script. The world doesn't really need another wicked stepmother, after all.

Grumpy Glaswegians going at it are once again the focus of David ("Young Adam") Mackenzie's bleak and dreary -- but not wholly uninteresting -- drama.

Another successful and intriguing entry in Mackenzie's growing oeuvre.

A teenage stalker with enough Oedipal issues to make Freud puke in his soup pursues his boss, a sweet but disturbed hotel manager. What this film lacks most is focus. At the beginning the plot tends toward a thriller/mystery vis-a-vis the possible murder of Hallam's mother, but the most unbelievable circumstances (fucking his step-mother in his tree house) push Hallam to Edinburgh where we meet Sophia Myles's character, Kate. Myles is a beautiful actress, and as Kate she walks with confidence and wherewithal. With hobbies, a fine job, a sense of compassion, and a sociable disposition, Kate seems like she has it all together. Yes, she's fucking her married boss, and yes, she does say, "I like creepy guys," but when Hallam's stalking, amateur spy behavior is revealed, her reaction defies all believability. I can imagine the film becoming a believable story about lost people who find each other and accept each other's fucked-up-ness, but with Myles as Kate and the dead mother plot stopping by every now and then as though it's checking up on how the film is progressing, the film becomes a muddled mess that has its sexy, alluring moments but ultimately sinks into a depravity that we can't follow without suspending every disbelieving bone in our bodies. Overall, bad casting and worse writing keep this film from being anything worth watching.

Awkward and engrossing movie that overcomes its unlikable lead by making him confused and relatable. It's a very difficult performance Bell has to pull off in this movie. He must present himself as a mentally fractured peeping tom whilst all the while leading us along a romantic path. The performances and characterizations are key here. Forlani isn't exactly the evil stepmother from many movies, but she is able to carry a certain stench of menace. Paired with Bell's confusion and creepiness, it adds up to more of an emotional mystery than a murder one. In many ways it's a wonderful coming of age tale, that delicately approaches the mind of a teenager. It bridges the gaps between anger, madness, and danger. At times it tries to be a bit too hip, with it's constant twangy soundtrack, but at least it works nicely with the dull but mesmerizing cinematography.

This unusual film was a fantastic journey with the awkward lead character, Hallem Foe, as he pursued his voyeuristic impulses. No spoiler here. The acting was convincing despite the fantastic episodes. Cleverly crafted to form an intense yet warm & funny original work.

"Who is Hallam Foe?" Hallam's talent for spying on people reveals his darkest fears-and his most peculiar desires. Driven to expose the true cause of his mother's death, he instead finds himself searching the rooftops of the city for love.

REVIEW
Hallam Foe is another dark film about buried pain and insecurities, much like director David Mackenzie's Young Adam. Mackenzie is also responsible for the crackling screenplay adapted from the novel by Peter Jinks, the story of a young lad named Hallam (Jamie Bell) damaged by his mother's death to the point where he separates himself from the world by living in a tree house, observing his father (Ciarán Hinds) in his too rapid replacement of Hallam's mother with the dangerous Verity (Claire Forlani). A bizarre 17-year-old, Hallam attacks his fears and the world dressed in a manner of beast like costumes, all to assuage his grief for his mother's death. When Verity's behavior drives Hallam from his elegant home, he retreats to Edinburgh, becoming a boy of the streets. One day he spies a woman named Kate (Sophia Myles) who greatly resembles his dead mother and he begins stalking her, spying on her in every conceivable way until he convinces her to hire him in her hotel as a kitchen porter. Proximity feeds obsession and Hallam discovers that Kate is having an affair with a married hotel executive, the result of which is a clash with reality, and Hallam must confront his Oedipal desires with his coming to grips with the reality of his grief for this deceased mother. The discovery he makes with Kate transfers to his relationship with his own family and opens doors for growth rather than maintaining his jail- like mental anguish. The story is bizarre and very dark at times, but the performance by Jamie Bell, well accompanied by those of Hinds, Forlani, Myles et al, make this tale of coming of age fascinating. The art direction (Caroline Grebbell), cinematography (Giles Nuttgens) and musical score (as concocted by Matt Biffa from performers such as Future Pilot A.K.A.) enhance the production - maintaining the high standards set by Mackenzie. Hallam is a lad we grow to love despite his kooky behavior: few other actors could inhabit this role with the élan of the considerably talented Jamie Bell. Recommended.