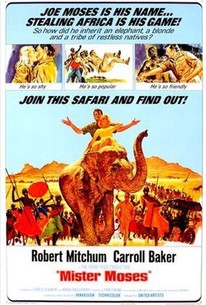 A scam artist is forced to pose as a miracle worker in this adventure tale with comic touches. Joe Moses (Robert Mitchum) is a confidence man and jewel smuggler from America who somehow finds himself in Africa, attempting to pull a fast one on some natives who quickly prove to be sharper than he expected. Tossed into the river for his troubles, Joe floats downstream, where he's eventually rescued by Julie Anderson (Carroll Baker), the daughter of Rev. Anderson (Alexander Knox), a missionary doing the Lord's work in a small village. The village is to be flooded when a new dam becomes operational in a few days, but while government functionary Robert (Ian Bannen) attempts to relocate the villagers, most of them refuse to budge. Robert has told them that they cannot bring their animals with them, and since they consider their animals members of the family, they would prefer to stay and face the inevitable. Hoping to amuse the people who helped save his life, Joe performs a few sleight-of-hand tricks for the natives and sets a bush on fire. Soon they believe that Joe is the Moses that they've heard about from the Holy Bible, and that he's come to lead the people of the village to safety. Joe's not so sure that he's the right man for the job, but when Julie hears of Joe's criminal past, she gives him the option of helping to save the villages, or being turned in to the police. However, Ubi (Raymond St. Jacques), a native who was educated in the U.S., has the feeling that Joe is up to no good, and doesn't appreciate the way he's been preying on the naiveté of his people, even if it is supposedly for their own good. This was Carroll Baker's last film before her massively-hyped title role in the biopic Harlow, whose box office failure proved disastrous to her career.

Reginald Beckwith
as Parkhurst
View All

There are no critic reviews yet for Mister Moses. Keep checking Rotten Tomatoes for updates!

Dull jungle adventure that even talented performers Mitchum and Carroll Baker can't save.