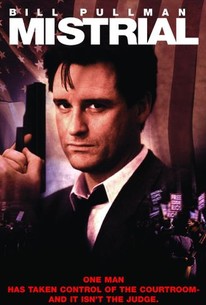 An angry cop literally kidnaps a court proceeding in a desperate bid for justice in this made-for-cable drama. Eddie Rios (John Seda) stands accused of the murder of two police officers, but he's found not guilty due to a lack of proper evidence. Steve Donohue (Bill Pullman), the detective who brought Rios in, is outraged by this decision, and in a burst of anger he pulls his gun and holds the defendant, the judge, and the jury hostage, demanding they immediately retry Rios, with Donohue presenting evidence he was forbidden to show the jury due to legal technicalities. Mistrial also stars Robert Loggia, Blair Underwood, and Roma Maffia.

Gene Mack
as Sgt. B. Adams

Scott Wickware
as Patrolman No. 1

Tony Meyler
as Patrolman No. 2

There are no critic reviews yet for Mistrial. Keep checking Rotten Tomatoes for updates!

There are no featured audience reviews yet. Click the link below to see what others say about Mistrial!