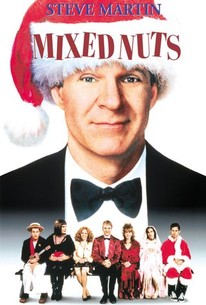 Critics Consensus: Mixed Nuts may provoke strong allergic reactions in all but the most undemanding filmgoers -- and the most forgiving Steve Martin fans.

Critics Consensus: Mixed Nuts may provoke strong allergic reactions in all but the most undemanding filmgoers -- and the most forgiving Steve Martin fans.

Critic Consensus: Mixed Nuts may provoke strong allergic reactions in all but the most undemanding filmgoers -- and the most forgiving Steve Martin fans.

A holiday comedy with dark overtones, Mixed Nuts presents a supposedly humorous look at the behind-the-scenes events at a crisis hotline on Christmas Eve. Philip (Steve Martin) runs Lifesavers, a Venice, California organization dedicated to helping the depressed and troubled. Unfortunately, Philip is a bit down himself, having learned that Lifesavers is on the verge of eviction. His staff isn't feeling particularly helpful either, with Mrs. Munchnik (Madeline Kahn) giving gruff, often insulting advice, and Catherine (Rita Wilson) obsessing over her own unspoken love for Philip. As the holiday approaches, various weirdoes of all shapes and sizes -- from to a pregnant clothing store owner (Juliette Lewis) to a disenchanted Santa Claus (Anthony LaPaglia) -- begin dropping in, throwing the already strained office into utter chaos. Director Nora Ephron followed her smash success Sleepless in Seattle with this remake of the cult 1982 French comedy Le Père Noël est une Ordure, co-authoring the script with her sister Delia Ephron. However, Mixed Nuts met with little box office or critical approval, with most viewers finding the film's manic farce disappointingly forced and abrasive. ~ Judd Blaise, Rovi

Jacqueline Murphy
as Nurse
View All

Director/co-scripter Nora Ephron pitches the humor at a cacophonous level and displays the comedic equivalent of two left feet in evolving an absurdist, slapstick yarn.

The beginning of Steve Martin's non-funny comedies. Ephron should know better as well.

Ephron's timing and sensitivity have deserted her, leaving behind only the sentimentality.

A title song incorporating the names of nut varieties is only one of the film's desperate ploys.

The dialogue is so bad that it's hard to believe anyone would even want to try to deliver it.

Is there anything more excruciating than failed farce?

...success is due almost entirely to the engaging, charismatic efforts of its various performers...

Even fans of Nora Ephron knew well enough to stay home and roast chestnuts on an open fire instead.

Even for a Christmas comedy, it's blasphemous -- delightfully so.

Martin's comedic talents show no signs of life in this truly abysmal adaptation of a superior French farce...

From Nora Ephron comes the kooky Christmas comedy Mixed Nuts. Starring Steve Martin, Rita Wilson, Juliette Lewis, and Adam Sandler, the film has a great cast. But the characters aren't that interesting; their just eccentric weirdos that're all doing their own separate things and they don't really work well together. And, the story too is all over the place, with things just happening randomly without any lead up. Festively chaotic, Mixed Nuts delivers a few laughs but is too uneven and lacks focus.

Although the movie itself was a little weird, I really enjoyed the whole cast. Enjoyable!

Adorable, with Martin, Kahn, and Wilson giving great performances, and a strange cameo from Adam Sandler.