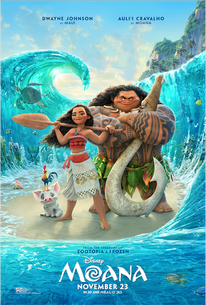 Critics Consensus: With a title character as three-dimensional as its lush animation and a story that adds fresh depth to Disney's time-tested formula, Moana is truly a family-friendly adventure for the ages.

Critics Consensus: With a title character as three-dimensional as its lush animation and a story that adds fresh depth to Disney's time-tested formula, Moana is truly a family-friendly adventure for the ages.

Critic Consensus: With a title character as three-dimensional as its lush animation and a story that adds fresh depth to Disney's time-tested formula, Moana is truly a family-friendly adventure for the ages.

Three thousand years ago, the greatest sailors in the world voyaged across the vast Pacific, discovering the many islands of Oceania. But then, for a millennium, their voyages stopped - and no one knows exactly why. From Walt Disney Animation Studios comes "Moana," a sweeping, CG-animated feature film about an adventurous teenager who sails out on a daring mission to save her people. During her journey, Moana (voice of Auli'i Cravalho) meets the mighty demigod Maui (voice of Dwayne Johnson), who guides her in her quest to become a master wayfinder. Together, they sail across the open ocean on an action-packed voyage, encountering enormous monsters and impossible odds, and along the way, Moana fulfills the ancient quest of her ancestors and discovers the one thing she's always sought: her own identity. Directed by the renowned filmmaking team of Ron Clements and John Musker ("The Little Mermaid," "Aladdin," "The Princess & the Frog"), produced by Osnat Shurer ("Lifted," "One Man Band"), and featuring music by Lin-Manuel Miranda, Mark Mancina and Opetaia Foa'i, "Moana" sails into U.S. theaters on Nov. 23, 2016.

It's a deeply moving and beautiful film that celebrates it's main character, her culture and her self-empowerment... but she could have been a lot more meaningful and authentic if she reflected and honored a specific Pacific Island culture.

One of the Mouse House's most sumptuous looking films from an animation standpoint.

I have a soft spot for the gigantic, arrogant, avaricious crab named Tamatoa.

Who knew the Rock could belt out giddy showstoppers like an old Broadway ham?

Perhaps the most encouraging part of Moana's feminism is its subtlety. It presents female agency as nothing out of the ordinary - it doesn't comment on it, there is no patriarchy she's fighting back against and there's no love story.

In the next election, can I just vote Disney?

Finally, Disney gives us a princess that truly breaks the mold.

Better than Finding Dory but not quite reaching the level of Zootopia, the latest Disney animated effort of 2016 adheres pretty much to the formula we've come to expect in recent years from the storied studio.

Best of all, you have a new style princess, one who looks to the future while paying homage to the past.

With everything you expect of Disney, Moana has the magic to instantly solidify itself as a Disney classic.

The look of the film is one of the first elements to astound.

Disney's animated pacific adventure is a feast for all senses. The visuals are stunningly beautiful, the songs catchy, the characters lovable. All this plays together so well, you don't even notice that the story is mostly put together of the usual chosen one tropes. Still, the film's beating heart is so huge that it easily sways you to have a wonderful time, no matter your age.

Young girl wants to realize her destiny by breaking free from the strict confines of her society. We've seen the hero's journey story before. It gently recycles elements of The Little Mermaid, Mulan and half a dozen other of their own creations. Even the way the chronicle presents fluctuating happy and sad events won't surprise anyone over the age of 5. Moana and Maui's rocky relationship are highlighted by ups and downs that I would warmly describe as haphazardly predicable . Yet the production is carried out in such a proficient manner that the appropriation is still incredibly entertaining. The soundtrack is filled with one transcendent song after another. The animation is vibrant and appealing. The evocation of paradise is stunningly beautiful. Even the water is a translucent character that protects our young hero. Her pets, a pig (Puanani Cravalho) and a rooster (Alan Tudyk), each provide wonderful comic relief. Moana happily employs an 'everything but the kitchen sink' mentality that includes the sum total of what makes a Disney film entertaining. You want colorful animation, music, sidekicks, a comic villain, humor, a moral? Well how about an army cuddly cute coconut warriors? You get all that and more and it's skillfully presented in an artistically appealing way. fastfilmreviews.com

It trips a bit in the end (post-climax) and how the characters seem to change their minds all the time, but even so this is a great animation that looks gorgeous in every way imaginable and has beautiful songs and a modern Disney Princess who is strong, independent and determined.