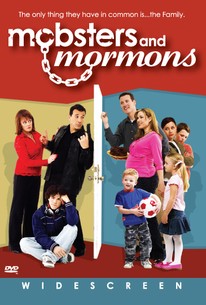 Can an East Coast mob mechanic find happiness in the most straight-laced community in America? Carmine "Beans" Pasquale (Mark De Carlo) is a gangster from New Jersey who is pinched by the FBI and learns the only way he can avoid spending the rest of his life in jail is to tell the cops all he knows about his boss, Angelo Marcello (Michael Kagan). However, Pasquale knows if he talks to the Feds, Marcello's top hit man, Little Nicky Cappuccino (Joe Maruzzo), will see to it that he never speaks (or breathes) again. To ensure Pasquale's safety, the FBI enroll him, his wife, Gina (Jeanette Puchich), and their teenage son, Vincent (Clay Taylor), in the Federal Witness Protection Program. Now known as George Cheeseman and supposedly hailing from Nebraska, Pasquale is relocated to Moab, UT, a quiet Mormon enclave where the new family feels very much out of place. As Pasquale learns to live without a strong cup of coffee while working a nine-to-five job, his aggressively friendly neighbors struggle to make the new folks in town feel welcome. Mobsters and Mormons was written and directed by John E. Moyer, a Utah filmmaker who has made a number of offbeat comedies pertaining to the Church of Latter Day Saints.

Critic Reviews for Mobsters and Mormons

A watered-down version of Sister Act.

Those outside the Mormon fold may be mystified by some of the running jokes -- just what is the big deal about scrapbooks?

The story still has more to offer to members of the church than hardcore mob-tale fans weaned on GoodFellas and The Sopranos, but less so than you'd think.

In an admirable show of versatility, Moyer delves into cultural self-examination.

A routine but entertaining fish-out-of-water comedy.

Fortunately, most of the jabs are generally good-natured, and the cast is pretty likable.

The movie is often funny and has a good heart, [but] if you are expecting subtlety, look elsewhere.

It's one of the better Mormon comedies so far -- not a huge compliment, I suppose, given the genre's history, but a sincere one.

Audience Reviews for Mobsters and Mormons

There are no featured audience reviews yet. Click the link below to see what others say about Mobsters and Mormons!