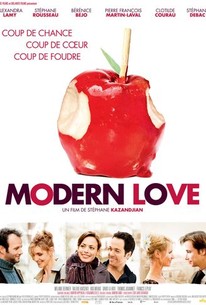 Love is in the air but not everyone is breathing easy in this romantic comedy with music from director Stephane Kazandjian. Eric Mericourt (Pierre Francois Martin-Laval) is a filmmaker who is given to wide mood swings and has trouble holding on to long-term relationships. Lately things are going well for him -- his latest movie, a musical called "Modern Love," is doing great business, and he's involved with a beautiful and caring woman, Anne (Melanie Bernier). But Eric is still haunted by his busted romance with Marie (Clotilde Courau), who left him three years before on New Year's Eve. One day, Eric bumps into Marie, who apologizes for leaving him and suggests they get together to catch up. To Eric surprise, Marie informs him that she and her current beau want to have a baby, but he's been diagnosed with a low sperm count and Marie asks Eric if he'd be willing to help her conceive a child. Meanwhile, lovelorn Elsa (Berenice Bejo) wants nothing more than to settle down with the right man, but hasn't had much luck finding him. Elsa is convinced she's discovered the guy of her dreams when she meets Jerome (Stephane Debac), who is good looking, personable and financially secure, but she's can't seem to interest him in getting serious and she wonders if he's actually attracted to women. Modern Love also stars Alexandra Lamy and Stephane Rousseau as the stars of Eric's movie, who appear in several song-and-dance numbers from the film.

There are no critic reviews yet for Modern Love. Keep checking Rotten Tomatoes for updates!

An entertaining little french film that portrays a fresh and lively take on relationships in our modern times. Worth seeing if you're really into romantic comedies because this one is kitschy and overly cliched. Berenice Bejo lives up to my expectations, as always.