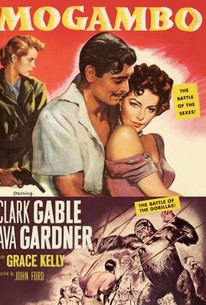 The 1953 Clark Gable film Mogambo is a remake of Gable's 1932 seriocomic adventure Red Dust. Where the earlier film was lensed on the MGM backlot, Mogambo was shot on location in Africa by director John Ford. Gable is safari leader Victor Marswell, who plays "host" to stranded Eloise Y. Kelly (Ava Gardner, who is no better than she ought to be but is just right for our raffish hero -- the Gardner role was originally played along franker pre-Code lines by Jean Harlow). Anthropologist Donald Nordley (Donald Sinden) hires Victor to lead him into the deepest, darkest jungle. Along for the ride is Donald's wife, Linda (Grace Kelly), outwardly cool as a cucumber but secretly harboring a lust for Victor. Scorned, Kelly tries to kill Victor, but true-blue Eloise takes the blame for the shooting. Reportedly, Grace Kelly carried on an off-camera romance with Clark Gable, which ended when the differences in their ages proved insurmountable. Even so, it is the easy rapport between Gable and Ava Gardner which stole the show in Mogambo.

Gable actually hasn't had one good movie since his return from World War II service. He's got it now in Mogambo.

I have no doubt that 'Mogambo' is one of the weakest romantic films I have ever seen from John Ford. [Full review in Spanish]

An amusing romantic comedy with an African jungle setting... Enjoyable hokum which never takes itself too seriously.

Mogambo is a silly, laid-back Hollywood romance with an exotic setting, but it's nonetheless quite affecting and satisfying.

Clark Gable reprises his role from Fleming's 1932 adventure in this colorful and enjoyable remake by John Ford, featuring great performances by Ava Gardner and Grace Kelly

Too long and too ridiculous.

The easy rapport between Gable and Ava becomes the film's main selling point.

the film's travelogue footage is the only thing that seems to save it from pointlessness.

Pointless remake of Red Dust squeaks by on star power.

I found this movie boring, I didn't watch the entire movie I was too bored. This is one of those jungle pictures with a little romance thrown in, and not much more. I didn't like it.

I was under whelmed.

okay but if you have a chance to see the original Red Dust instead go with that.