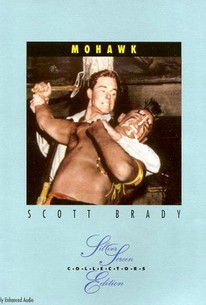 Though released by 20th Century-Fox, Mohawk was produced independently by Edward L. Alperson, who also doubled as the film's musical composer. Scott Brady stars as an 18th century Boston artist, sent to Mohawk Valley to paint landscapes and portraits of Native Americans. Brady is forced to pack up his easel when he becomes embroiled in a war between the Indians and avaricious land baron John Hoyt. The villain intends to play both ends against the middle, then claim what's left when the Mohawks and settlers wipe each other out. Brady not only defies Hoyt, but also battles near-psychotic Mohawk warrior Neville Brand.

Mae Clarke
as Minikah, His Wife

Chabon Jadi
as Dancer
View All

A stilted but cordial B Western set in the pre-Revolutionary Mohawk Valley of New England.

The color for this obviously set bound Western is gorgeous, the feature's best feature, but the rest is on the hokey side.