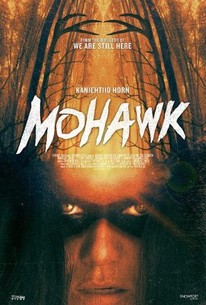 After one of her tribe sets an American camp ablaze, a young Mohawk warrior finds herself pursued by a contingent of military renegades set on revenge. Fleeing deep into the woods they call home, Oak and Calvin, along with their British companion Joshua, must now fight back against the bloodthirsty Colonel Holt and his soldiers - using every resource both real and supernatural that the winding forest can offer.

There's a lot about Mohawk that simply doesn't work.

As with last year's The Void, Mohawk is wonderfully long on setting, mood, and practical effects, and woefully short on storytelling and drama.

I have no doubt that Geoghegan's intentions are sincere but the muddling of historical fiction with the Grand Guignol is an uneven mix that never fully gels.

Has the same political urgency as Wes Craven's now-classic, but rough-around-the-edges early films, like Last House on the Left and The Hills Have Eyes.

"Mohawk" is a gripping and despairing action picture, about how we can't seem to stop trying to destroy those we distrust - including ourselves.

Ted Geoghegan's Mohawk is a survival-of-the-fittest film that's charged with a thunderous urgency.

Mohawk is overall a very strong second feature film for director Ted Geoghegan with powerful performances, good effects, beautiful images, and a story that is worth seeing.

The low-budget seams are obvious, but the film is more of a modest success than a noble failure, thanks to the lean, evocative premise, which is smartly realized by Geohegan's direction.

A film that looks at American history all the way through to the present and can only respond with blood-soaked sadness.

Mohawk is by no means perfect, but it's unlike any other recent film, and I'm grateful for that.

A brutal chase thriller told from a perspective we rarely see.

Mohawk is hurt by its budget, but it still delivers a thrilling and brutal thriller with something to say about politics and the treatment of Native Americans.

There are no featured audience reviews yet. Click the link below to see what others say about Mohawk!