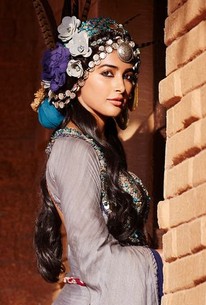 During the Pre-historic Indus Valley, in 2016 BC, the evil greed of a man is about to destroy one of the oldest cities in the ancient world, Mohenjo Daro. A young indigo farmer, Sarman, enters the city and meets Chaani, the daughter of the Priest, predicted to be the Origin of a New Society. Sarman, in his attempt to win Chaani's love, uncovers the secrets that nobody was ever supposed to know--about Chaani, about Mohenjo Daro and about his own past!

It breaks my heart to say this because so much talent and sweat is involved, but Mohenjo Daro is a mess.

This is a movie of remarkable scale; on the level of sheer craftsmanship, it offers some appeal. If only Gowarikar had put the same level of effort into the story.

Fortunately the camera adores Roshan, and everyone else melts away. He nailed the hero persona long ago, and even if it feels like a rehash here, there's no resisting the star's potent charms ...

Mr. Roshan, an appealing dancer, works hard to twinkle his way into our affections and make Sarmar something more than a cardboard hero. He can't, but the effort is appreciated.

Another messy movie of this magnitude from either Gowariker or Hrithik could well be a blow that would be hard to recover from.

Mohenjo Daro looks like a hangover of a bad cocktail -- one that mixed Lagaan and Jodhaa Akbar.

If you want to enjoy Mohenjo Daro, leave your disbelief by the door for Ashutosh Gowarikar's newest blast from the past only works as a fairy tale, not nailed in history, but hanging somewhere between Game of Thrones and Baahubali.

Mohenjo Daro is a well-made film, just not very well thought out.

The love story is painfully predictable.

Gowariker's film feels average, and no amount of songs by A R Rahman or Hrithik Roshan's acting prowess can change that.

It's hardly fresh and could have been a lot more, but it's all still entertaining if you can overlook the tacky CGI crocodiles and unicorns.

Mohenjo Daro is far from perfect, but it's also far more than the sum of its memes.

There are no featured audience reviews yet. Click the link below to see what others say about Mohenjo Daro!