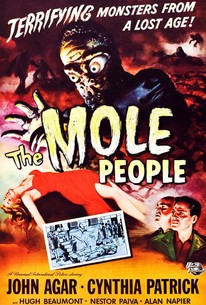 While working in Asia, two archeologists (John Agar, Hugh Beaumont) find a tribe of light-hating albinos who use bizarre mole creatures to do their grunt work. The good doctors break out the flashlights and save the day.

Dr. Frank Baxter
as Himself

Eddie Parker
as Moleman
View All

Critic Reviews for The Mole People

The estate of H.G. Wells could sue for how thoroughly The Mole People rips off The Time Machine's vision of Elois and Morlocks.

The Mole People is nowhere as distinguished as the likes of such studio stablemates as The Incredible Shrinking Man and Tarantula, but it still qualifies as undemanding entertainment.

Appreciated as a bit of cheap science fiction, "The Mole People" fulfills the appetite...

Give me a Universal horror flick from the '50s any time, and include John Agar.

The acting was stiff and the special effects were cheesy.

Audience Reviews for The Mole People

I don't remember the story of this movie, or even if there was a story, but as you can see from the title it's about people who live underground like moles. If that interests you, check it out, if not, stay away.

Ward Cleaver journeys to the center of the earth to do battle with a race of albinos living on mushrooms (I'm not kidding). This is science fiction at it's corny, campy best. I love this stuff (I'm not kidding). *Kudos to the makeup and special effects artists at Universal Studios. Not once did I notice a single zipper.

Another great black & white sci fi chiller theater type movie. Filmed in 1956, with John Agar (Shirley Temple's Husband) who stared in a number of Sci-Fi Movies in the 1950-1970 era and Hugh Beaumont better know to most as Beaver's Dad, Ward on the long running TV Series of Leave it to Beaver, Time frame 1957-1963, Hugh Appeared in 234 episodes (Pretty Amazing). This is one of the few science teams who didn't have a women with them, but they found one in the underworld. Cynthia Patrick who Did very little after this movie Perry Mason and Death valley days. The Mole People were not really the bad guys in this movie. There Costumes reminded me of some I have seen on Outer Limits and Twilight Zone. Any way this science team finds a world in the depths of the earth with people as white as powder called Sumerian and their goddess is Ishtar?s. All in all its a ok Sci Fi 1956 Film, Good for a one time showing, Not as good as Attack of the Crab Monster. 3 Stars is what this one deserves