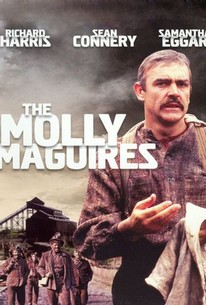 Irish immigrant coal workers rebel against the harsh company policies in a Pennsylvania coal town. The company hires Pinkerton detective James McParlan (Richard Harris) to infiltrate the rank and file workers and report back on any union activity. Their leader is Jack Kehoe (Sean Connery), the tough Irish organizer who stands up to the company when he asks for a decent suit of clothes for the funeral of a co-worker. The Molly Maguires is the secret society of miners that seeks to right the wrongs of the unjust and callous owners of the company. McParlan tries to join the gang, but Jack is suspicious of the visitor. The two gain mutual respect for each other despite being on different sides, and McParlan even rescues a union member from certain death. The gang carries on an underground war against the evil forces of the cold-hearted company. Samantha Eggar is the love interest for James. This 11 million dollar production only took in 1.5 million at the box office from the initial release of this sometimes slow-moving drama.

Critic Reviews for The Molly Maguires

The trouble, as so often with Ritt films, is that the situation remains interesting rather than involving. But at least this detachment means that one has the leisure to savour the textures of Wong Howe's magnificent camerawork.

Realism without much reality, enormous care for the wrong details, historical accuracy and spineless dramaturgy.

The superb and beautiful camerawork of veteran cinematographer James Wong Howe gives a softness to the story that it would otherwise lack.

It does offer some memorable moments of quality and passion.

What it does have, however, are powerful performances from Connery as a labour leader, and Harris as a government agent sent to infiltrate the group. There is also good photography by Howe.

You'll be nudged one way and pushed the other

Audience Reviews for The Molly Maguires

There are no featured audience reviews yet. Click the link below to see what others say about The Molly Maguires!