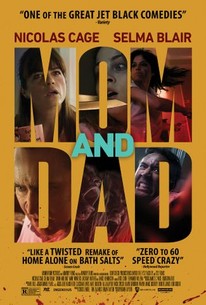 Critics Consensus: Mom and Dad's gonzo premise serves as an effective springboard for a wickedly dark, bloody comedy - and an appropriately over-the-top performance from Nicolas Cage.

Critics Consensus: Mom and Dad's gonzo premise serves as an effective springboard for a wickedly dark, bloody comedy - and an appropriately over-the-top performance from Nicolas Cage.

Critic Consensus: Mom and Dad's gonzo premise serves as an effective springboard for a wickedly dark, bloody comedy - and an appropriately over-the-top performance from Nicolas Cage.

A strange disorder suddenly causes parents to violently turn against their own children, forcing a suburban teen (Anne Winters) and her younger brother (Zackary Arthur) to evade the clutches of their now-deranged mom (Selma Blair) and dad (Nicolas Cage). However, their situation gets even more complicated when their grandparents (Lance Henriksen and Marilyn Dodds Frank) show up for a visit. Written and directed by Brian Taylor (Crank, Gamer).

Michael Yurchak
as Dad in Pool

Brionne Davis
as Tanner
View All

News & Interviews for Mom and Dad

Beyond The Wicker Man: Celebrating 35 Years of Nicolas Cage Curiosities
The 13 Fiercest Moms in Horror
New On DVD in February: Coco, Three Billboards, Only the Brave and More

View All Mom and Dad News

Critic Reviews for Mom and Dad

The action is big and messy, bloody and ridiculous, but there is actually a real sense of horror in kids trying to survive such a personal, intimate, and uncompromising betrayal.

A hilarious, knowing bit of schlock ...

Both a torrid exploitation cinema throwback, and a metaphor for a generation of kids screwed over by their elders.

The "joke" soon wears thin, however, and the film, with few actual ideas to express, resorts to slapdash plotting and dead-end gore.

It is probably best not to look for the deeper meanings in the plot and to regard Mom & Dad as a new twist on an old-fashioned survival story.

It's just a fun time... a simple film with a simple idea and letting it run through.

The very definition of a midnight movie.

The escalating absurdity of crazed parents blithely brainstorming ways to slaughter their children is dementedly superb.

In 1979, the poster for Alien told us that, in space, no one can hear you scream. But I bet they can hear Nicolas Cage.

There are many people in the world who collect wacky Nicolas Cage performances, and certainly this one hits all the right notes. It also happens to be a serviceable horror film that is smart and funny as well.

"Mom and Dad" is a nutter of a film that is highly entertaining and knows exactly what it is doing. Brian Taylor definitely knows how to craft insanity and how to make it fun to watch.

Audience Reviews for Mom and Dad

It's dumb as Hell and probably only got created to facilitate Nic Cage meeting his freakout quota and also what was that ending? But shit, I've had way worse times with a movie. Probably less cathartic to someone who actually likes children or has a healthy relationship with their parents, but for me and mine? Mom and Dad weren't half bad.