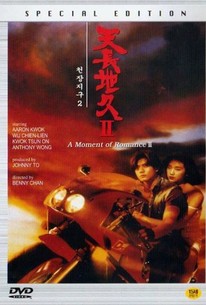 The title of this Hong-Kong film is a little deceiving. It is actually more of a biker-action film with a hint of romance targeted for adolescent audiences. Frank is an angry young-man on a motorcycle. His girlfriend and total opposite is Celia, a mainlander trying to earn enough money to defend her brother, a political prisoner. Her chosen profession is prostitution. She came to Frank after encountering problems with both the police and gangsters. While the mobsters continue their pursuit of Celia, Frank enters a motorcycle race to try to win the cash prize that will help Celia out. He is helped by a worker at the track. One of the pursuing policemen also tries to help, but he is too late. Blood is spilled.

Kwok Tsuen On
as Jack

There are no critic reviews yet for Tian ruo you qing II: Zhi tian chang di jiu (A Moment of Romance II). Keep checking Rotten Tomatoes for updates!

There are no featured reviews for Tian ruo you qing II: Zhi tian chang di jiu (A Moment of Romance II) at this time.