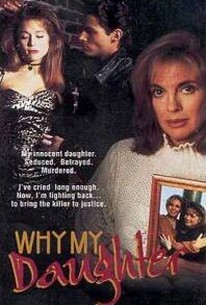 Drama, based on a true story, about a teenage girl, Diana, who inadvertently is sucked into the world of prostitution by her boyfriend-turned-pimp, A.J., whom starts abusing her and eventually murders her. In the aftermath of her death, her mother, Gayle, makes the crushing discovery of how the law views prostitutes (Diana's murder cause was listed as NHI, or "No Humans Involved"), plus the police is unable to charge A.J. with her murder due to a resulting lack of evidence. While working with police to land A.J. into prison on another related charge, Gayle meets another one of A.J. prostitutes, April, and begins learning things from her about A.J., plus helps her get out of the trade and back into her mother's arms.

Critic Reviews for Moment of Truth: Why My Daughter?

Drama, based on true story of a mother who lost her daughter to prostitution, stumbles over weak performances and predictable script.

There are no featured reviews for Moment of Truth: Why My Daughter? at this time.

Moment of Truth: Why My Daughter? Quotes