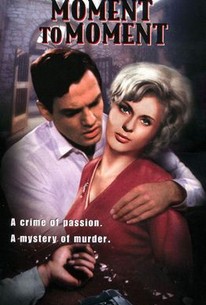 Mervyn LeRoy, one of the best-known directors of Hollywood's Golden Age, wrapped up his career behind the camera with this suspense drama. Kay Stanton (Jean Seberg) is the wife of well-known psychiatrist Neil Stanton (Arthur Hill). Neil's international reputation often keeps him on the road lecturing at medical conferences, leaving Kay alone at home. Bored and craving attention, Kay becomes involved with a handsome Naval officer named Mark Dominic (Sean Garrison), but the affair is often rocky, and one day, in the midst of an argument, Kay accidentally shoots Mark. Convinced that Mark is dead, Kay panics and calls her friend Daphne (Honor Blackman). With Daphne's help, Kay drags Mark's body to a car, and they drive to a deep ravine, where they toss the body in. Shortly afterward, Kay calls the police to report that a dead body is in the ravine, without giving her name. But they learn that the body was not found; as it turns out, Mark was only wounded in the shooting, and he now waits in a hospital ward, recovering from his wounds and suffering from amnesia. Moment to Moment was made at a time when leading lady Jean Seberg was getting most of her work in European films; she wasn't to make a picture for a U.S. studio for another three years.

Georgette Anys
as Louise
View All

Critic Reviews for Moment to Moment

Lily Tomlin (the older woman) and John Travolta (her young stud) are meant for each other in this relentless stinker. They even share the same hair style.

There are no featured reviews for Moment to Moment at this time.