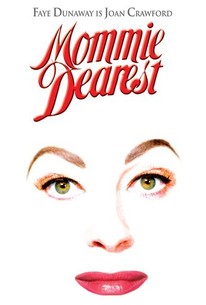 Critics Consensus: Mommie Dearest certainly doesn't lack for conviction, and neither does Faye Dunaway's legendary performance as a wire-wielding monster; unfortunately, the movie is too campy and undisciplined to transcend guilty pleasure.

Critics Consensus: Mommie Dearest certainly doesn't lack for conviction, and neither does Faye Dunaway's legendary performance as a wire-wielding monster; unfortunately, the movie is too campy and undisciplined to transcend guilty pleasure.

Critic Consensus: Mommie Dearest certainly doesn't lack for conviction, and neither does Faye Dunaway's legendary performance as a wire-wielding monster; unfortunately, the movie is too campy and undisciplined to transcend guilty pleasure.

When her adoptive mother Joan Crawford died in 1977, erstwhile actress/author Christina Crawford was left out of Crawford's will. Christina then penned a scathing autobiography. According to this film (and the book that preceded it), Joan Crawford was a licentious, child-beating behemoth, who stalked and postured through life.

Gary Allen
as Jimmy the Photographer

Xander Berkeley
as Christopher Crawford as an Adult

S. John Launer
as Chairman of Board

Erica Wexler
as Susan
View All

Lacking psychological intelligence or, for that matter, awareness of Hollywood sociology, Mommie Dearest is just a collection of screechy scenes further distanced by convictionless direction.

The flaws aren't the story with this unusual film. The story is in the powerful, vivid and emotionally draining scenes of torment and conflict between a mother and daughter.

The character is rendered such a grotesque, its moments don't accumulate to an arc or even a readable profile. They just pile up, like cars in a traffic accident, and all we can do is gawk.

By all accounts, Miss Crawford had serious failings as a mother, but the film pounds so unrelentingly on her raging cruelty to her children -- and her equally offensive public sweetness -- that she emerges as a laughable caricature.

It's rich, stimulating thought in spite of itself.

[Faye Dunaway's] balls to the wall performance...gave color, flair and a heck of a lot of juice to what's normally a safe to the point of boring film genre.

... Mommie Dearest is not a film I'm likely ever to revisit; however, I can recognize and acknowledge how it resonates with so many who can dissociate the reality from the characters.

Over the years, Mommie Dearest has created a cult like following the likes of which would make Joan Crawford proud.

The problem with Dunaway's over-the-top performance is that it becomes increasingly tiresome, less the fault of the actress than of the director (the usually dependable Frank Perry) and team of scripters.

The movie is confusing and boring... Faye Dunaway does a decent job, but is incapable of overcoming the weakness of the book and the script. [Full Review in Spanish]

Mommie Dearest becomes a kind of homage to the monster herself -- the emotions are so splendid, the scenes so dramatic, the experiences so incandescent.

A disjointed and episodic adaptation that will appeal more to those who are curious to know about Joan Crawford's abusive relationship with her daughter, since it makes no effort in character development and is only worth it for Faye Dunaway in a histrionic, over-the-top performance.

This film is the worst kind of exploitation flick possible, and it was taken seriously in production no less! Today billed as a camp classic, and advertised as such once it was discovered for it's ludicrous content, Mommie Dearest is synonymous with bad taste and over-acting. This goes especially for lead Faye Dunaway, who portrays screen legend Joan Crawford. Based off of Crawford's adopted daughter Christina Crawford's tell-all memoir of the same name, most of the film is comprised of scenes showing Crawford abusing her daughter physically and emotionally. The film centers on the tumultuous life of the actress, who suffered from alcoholism and may have also, had a bipolar disorder. Dunaway has complained that director Frank Perry didn't know how to rein in actor's over performing and how true that statement is. Dunaway is out of control throughout, and though many actions are cruel, villainous stages of abuse, at times you feel reviled for watching something so outrageous and unrealistic. It's certainly not laugh out loud funny, because the subject is so horrible and Dunaway does do a decent job of implying the actress' sullen manner. The movie also suffers from the fact that none of the events shown have true credibility, as friends, co-stars, and an ex-husband of the screen legend have argued against the claims of the book. The film itself is very cheap looking, sets and costumes looking second-hand, wigs and backdrops almost painted on. The performances from the children are actually laughable, and the scenes of the beatings often look like a madwoman pummeling a pillow. Bits of this are incoherent and often things aren't explained in a helpful manner, which makes it difficult to piece together the true nature of the film or its content. By the middle I and my boyfriend were betting on what atrocious act would come next. From Joan Crawford's beatings, to her impeccable housekeeping, to wielding a large axe to cut down a sapling, to yelling hoarse over wire hangers, there's just too much awkward tumult for anyone to take this seriously. Actually, one feels bad for the screen siren, her daughter, and Faye Dunaway, who went as far as putting on three hours' worth of makeup to look authentic for this film. (And does) It's just a sad waste, and a bigger waste of time.

A fantastic drama with great actors, and a great story, I loved it, and I highly recommend it.

Faye Dunaway is suberb as Joan Crwaford, in this scary and sometimes over the top autobiography. "No wire hangers, ever!"