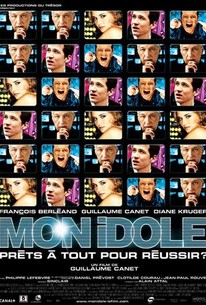 Actor Guillaume Canet, best known to American audiences for his work in The Beach, makes his directorial debut with the dark comedy, Mon idole. Canet also stars in the film as Bastien, an ambitious young man working as an assistant to Philippe Letzger (Philippe Lefebvre, who co-wrote the script with Canet and Eric Naggar) the overbearing host of a raucous, exploitative Jerry Springer-like game/talk show called It's Tissue Time! in which the goal is to make the contestants cry. Bastien warms up the audience and runs errands for Letzger, in addition to coming up with helpful ideas for the network, which Letzger takes credit for. Bastien puts up with Letzger's abuse because he wants to work with his idol, the show's impossibly suave producer, Jean-Louis Broustal (François Berléand). To Bastien's surprise, Broustal stops ignoring him one day, and starts taking an interest in the young man's ideas. Bastien lives with his girlfriend, Fabienne (Clotilde Courau), who's tired of hearing about how wonderful Broustal is. And Bastien is torn when he realizes that the pretty blond he's been admiring around the office is Broustal's young wife, Clara (Diane Kruger). Things take a strange turn for Bastien when Broustal invites him out for a night on the town that quickly turns into a weekend at the couple's remote country estate. Clara quickly gets Bastien alone and beds him, and Broustal doesn't seem to mind. Broustal makes a lot of promises about Bastien's future in television, but what does the couple want from him? As the weekend progresses, their motives seem increasingly bizarre and even sinister. Mon idole was nominated for César Awards for Best First Film and for Berléand's performance. It was shown at Lincoln Center in New York as part of their 2003 Rendez-vous with French Cinema.

Anne Marivin
as The assistant

Laurent Lafitte
as Fabrice
View All

If there will ever be any interest generated for this movie in the future, it will be due to the newfound success of Diane Kruger.

There are no featured audience reviews yet. Click the link below to see what others say about Mon Idole!