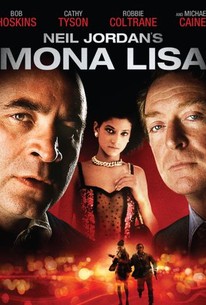 Bob Hoskins plays George, a tough but basically goodhearted British mob flunky, recently released from prison, where he'd served a term to cover up for his gangster boss (Michael Caine). Still willing to be everyone's doormat, George agrees to act as chauffeur for Simone (Cathy Tyson), a haughty, high-priced call girl. They don't like each other at first, but George begins to fall for her and take a protective interest. She implores him to help her find her only truly friend, a prostitute named Cathy (Kate Hardie). Touched by this devotion, George locates the girl, only to be chagrined to learn that Simone and Cathy are lovers. Hoskins is used and abused by so many people in Mona Lisa that when the worm finally does turn, you feel like cheering--even though it doesn't make him any happier. Director Neil Jordan cowrote this study of underworld mores with David Leland.

Sammi Davis
as May

No wonder audiences have taken to this gritty romance as to a mongrel puppy; for at heart Mona Lisa is an old-fashioned poor-soul weepie, and George is less a Cagney rakehell than a Chaplin tramp.

A wonderful achievement, a dark film with a generous heart in the shape of an extraordinarily touching performance from Hoskins.

The real drama ... stems from each character's frustrated attempt to transcend his or her lousy lot in life.

It's like watching the departure of an ocean liner. After all of the initial excitement, you're left on the dock, alone, wondering what all the fuss was about.

In an era when movies about love almost always invariably devolve into formulaic affairs, Neil Jordan's Mona Lisa stands out as an often-surprising, multi-layered achievement.

Bob Hoskins delivers the performance of his career in this riveting drama that takes place in a particularly unsavory underworld.

... if you've got the stomach for a brutal depiction of the darker side of London, Mona Lisa doesn't so much engage you with a smile as rabbit-punches you in the gut...

A charming, pulsating journey that's a mish-mash of crime thriller, drama and romance, laced with just a smidge of humour.

A dreary but compelling romantic crime thriller about love being the important ingredient in life.

A superb cast lead by Bob Hoskins in the performance of his career.

A riveting, intelligently scripted drama concerning an ex-con (Bob Hoskins) fresh out of prison, who picks up a job as a driver for a high-priced prostitute (Cathy Tyson), who he eventually becomes infatuated with to the point where he makes a concerted effort to track down a close friend of hers that she lost in the dangerous business. An extremely well-paced, arresting tale full of twists, anchored by a ferocious, phenomenal performance from the always under-rated Hoskins makes this film a gem. The story is terrifically written, with a realistic, heart-wrenching twist in the midst of it all. While director Neil Jordan gets noted mostly for the well-done "The Crying Game", to me, this is the best movie he has done, at least that of what I have seen. Michael Caine is also great in a slimy turn against the types of characters he usually plays, and he pulls it off well, but this movie is mainly all Hoskins.

Many consider this the British Taxi Driver. A bit of a simplification as it deals with a man who gets involved with the underworld of underage girls and prostitution. Mona Lisa is much more a romance set against a backdrop of criminal violence. Bob Hoskins stars in his greatest role ever. Just out of prison, he gets a job driving around a high class call girl. They develop a working relationship of trust and soon Hoskins is asked to track down a missing girl. Hoskins is so perfect in this role. You can easily see him as a gruff and mean gangster, but he adds a vulnerability which serves the romantic angle so well. He also has an endearing childlike naivety. Hoskins has great chemistry with everyone from Michael Caines villainous Mortwell, to his conversations about crime novels with Robbie Coltrane. The soundtrack is ace, with the opening and closing lyrics to Mona Lisa being all about interpretation, which this film certainly asks you to find your own. Director Neil Jordan litters scenes with which allude to fantasy stories, a white rabbit here, performing dwarfs there, etc. The dialogue is funny, the relationships emotional, and the themes disturbing. It's the full package and almost unique in its tone.

Edgy, but in a polite, British sort of way. Bob Hoskins is absolutely spot-on (as usual).

Only someone as vulnerable and sincere as Bob Hoskins could play the central character, an ex-con, loner, cheap, no good, now a chauffeur, with a taste for stories and a fixation for the hooker he works for. His performance carries the film. I love the use of Nat "King" Cole's music, as well as the sordid underworld where the story move around. The opening scene, where Hoskin's character returns home after time in prison, and the one in the coast of Brighton, where he realizes Simone's intentions, really moved me. It's also quite good to see Michael Caine and Hoskins sharing screen time, because after what they did in "Get Carter" and "The long good friday" for me they are like the De Niro and Pacino of British isles.