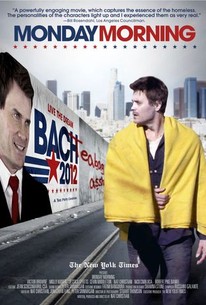 Thomas Bach (Victor Brown) is on top of his game. A popular right-wing radio talk-show host in Minneapolis and a hero of the Tea Party Movement, he is handpicked to run for the U.S. Senate. But first he must fly to Los Angeles and clean up some dirty laundry that might damage his campaign. A victim of an attack, Thomas wakes up on the streets of Los Angeles without his memory and unaware that he is a diabetic. Wandering skid row, he inevitably blends in with the homeless population and, without medication, becomes more and more ill. As he experiences both the violence and hardship as well as the courage and humanity of the homeless community, a more compassionate Thomas Bach emerges. Upon regaining his memory a week later, Thomas returns home, a hero of the media, with a great story for the campaign. But with experiences that conflict with his political rhetoric, he now faces a choice between career and conscience. -- (C) Official Site

Jim Westcott
as Man with Bible

Stephanie Allensworth
as Woman at Party

Alan A. Fiene
as Minnesota Politician

Oscar A. Rivera
as Store Employee

Richard F. Reeder
as One on One Host

Richard Reeder
as One on One Host

When will independent filmmakers understand that formulaic film style can only spoil the non-traditional subject matter of their films?

Unpredictable, intriguing and unflinching, but somewhat uneven, heavy-handed and fails to pack a strong sociopolitical punch.

There are no featured audience reviews yet. Click the link below to see what others say about Monday Morning!