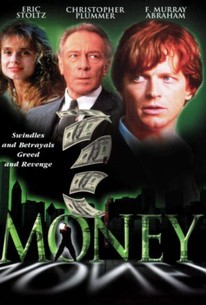 Stars and famous locations abound in this multinational production, a would-be "financial thriller" about swindles and betrayals among jet-set gazillionaires, which takes place in glamour spots all over the globe. Somebody has stolen millions of dollars from his father, and Frank Cimballi (Eric Stoltz) means to find out who. To that end, he enlists the help of a variety of people, including a man (Mario Adorf) who is wealthy in his own right, and a French private eye (Bruno Cremer) who appears to have read too many American detective novels. The bad guys seem to have Nazi connections, which adds spice to the chase, but reviewers discounted this movie, based on a best-selling French novel, for its slapdash storytelling.

F. Murray Abraham
as Will Scarlet

Mario Adorf
as The Turk

There are no critic reviews yet for Money. Keep checking Rotten Tomatoes for updates!

There are no featured reviews for Money at this time.