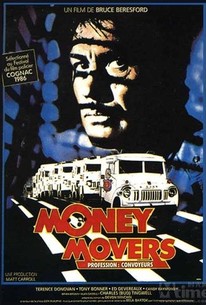 In order to raise the money for his "breakthrough" film Breaker Morant, Australian director Bruce Beresford dashed off the guaranteed audience pleaser Money Movers. Terence Donovan masterminds a bank-vault heist that will potentially net his gang 20 million Australian dollars. The scheme predictably goes sour, but this conclusion is reached via a most unexpected fashion. Ed Devereaux, best known to American audiences for his leading-man gig on the TV series Skippy, the Bush Kangaroo, is second billed as "Dick Martin" (no, not the American TV-comic Dick Martin). Money Movers was based on a novel by Devon Minchin. ~ Hal Erickson, Rovi

Tony Allison
as Man at bank

There are no critic reviews yet for Money Movers. Keep checking Rotten Tomatoes for updates!

There are no featured reviews for Money Movers at this time.