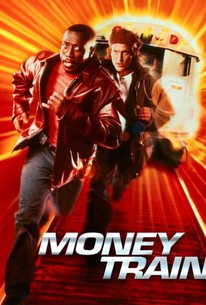 Critics Consensus: Loud, incoherent, and aimless, Money Train reunites Snipes and Harrelson -- and proves that starring duos are far from immune to the law of diminishing returns.

Critics Consensus: Loud, incoherent, and aimless, Money Train reunites Snipes and Harrelson -- and proves that starring duos are far from immune to the law of diminishing returns.

Critic Consensus: Loud, incoherent, and aimless, Money Train reunites Snipes and Harrelson -- and proves that starring duos are far from immune to the law of diminishing returns.

Actors Woody Harrelson and Wesley Snipes team up for the third time in this actioner that has them playing brothers working as subway cops for New York City transit. Their job is to curtail subway crime. They are also in hot pursuit of an arsonist. The "brothers," are dramatically different. John (Snipes) is black, hyper-responsible, and very protective of the lily white and free-spirited Charlie (Harrelson). Irresponsible Charlie has a larcenous streak and secretly fantasizes about robbing the money train, the subway assigned to collect all the money gathered each day at each station throughout the city. He would use the loot to pay off his considerable gambling debts. The natural tension between the disparate twosome increases with the addition of Grace, their new partner. Eventually they decide to give it a go and attempt to rob the money train.

Aida Turturro
as Woman on Platform

Alvaleta Guess
as Woman on Platform

Jack A. O'Connell
as Dispatcher

Steven Randazzo
as Guy at Bar

Bounces along with a lame script and inconsistent pace.

Hardly worth the four-year wait.

More viscerally charged than "Speed" and hipper than "Die Hard With a Vengeance," the movie is a careening, screeching joyride that showers sparks like fireworks.

"Money Train" is a by-the-numbers action-buddy picture, and few directors run through those numbers as smoothly as Joseph Ruben.

It's stupid, but also breezier than the year's other 12-score releases not worth a second look.

Even if they only charged a token, it would be too much.

A loud and truly pointless action-comedy.

Harrelson and Snipes reproduce their onscreen magic from "White Men Can't Jump," even though no one asked them to

Snipes and Harrelson are still good together, but the screenplay stinks.

Oh my. Why even think about it? It stars Wesley Snipes and Woody Harrelson. How could it be worth seeing?

Snipes and Harrelson team up again for this so so action thriller as two transit cops that lose their jobs and end up trying to rob the moneytrain. The film kicks off pretty well with the duo tagging up together and bustin bad guys whilst somewhat rebelling against their anal boss, as you can expect there is allot of fast dialog, fast punches and swift stunts but not enough to really impress or save the film. After the first ten minutes or so the film does get quite dull quite quick its gotta be said with not much action and mainly the boys squabbling over Jennifer Lopez, we get some good fighting moments with Snipes doing his thing and Harrelson being abit of a dweeb haha The film really picks up again in the finale with the guys trying to work out what to do when the plan by Harrelson to steal the moneytrain goes tits up and they are speeding towards certain death with another subway train. Its definitely quite tense and its filmed/created pretty well giving a good sense of danger and speed, easily the best part of the film and just about makes it watchable, only just.

Unfortunately, this seems to be an overlooked movie. Two foster brothers, Charlie (Woody Harrelson) and John (Wesley Snipes), patrol the streets of New York City trying to catch all the thieves and criminals that they can. They both get along and work together great, but things might get tangled up a bit when a woman (Jennifer Lopez) comes into view and they both like her. Also, Charlie and this woman are both in a lot of trouble in their own ways, both having to do with money. If you like any other of Wesley Snipes's movies where he plays as an action or a comedy hero, then I definitely recommend getting "Money Train." Even if you don't know who Wesley Snipes is, you'll probably still like the movie if you like comedy and/or action movies. Wesley Snipes and Woody Harrelson are both hilarious throughout the film and there's also some good action scenes to be watched. I hope to see these two star in another movie together because they're a great duo. Trust me, "Money Train" is one train you can't afford to miss. NOTE: That was my Amazon review from the year 2001.

The chemistry between Woody Harrelson and Wesley Snipes is great, but the movie can't decide what it wants to be. Action flick or romantic comedy? Villains that have nothing to do with the plot - really, there is no plot - kind of just come and go.