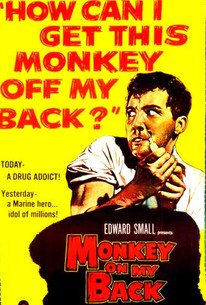 Monkey on My Back Photos

The painfully true story of welterweight boxing champion Barney Ross is detailed in Monkey on My Back. Cameron Mitchell stars as Ross, whose meteoric ring career is interrupted when he joins the Marines at the outset of WWII. A highly decorated hero, Ross contracts malaria oversees and is given morphine to assuage the pain. By the time he returns to the states, Ross is a confirmed drug addict. Before he can rise to the top again, he must hit rock bottom and his descent into the hell of narcotics dependency is graphically illustrated (so much so that the film was almost denied a Production Code seal). Though a cured Barney Ross served as technical advisor for Monkey on My Back, he ended up suing the producers for defamation of character -- and lost.

Critic Reviews for Monkey on My Back

Audience Reviews for Monkey on My Back

It was a pretty good movie for what it was. I thought it did a good job with showing the highs and lows.

Monkey on My Back Quotes