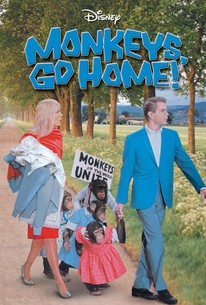 A man begins monkeying around with his new farm with hilarious results in this comedy for the whole family. American Hank Dussard (Dean Jones) inherits an olive plantation in a small French village after his uncle passes away. Hank soon gets a crash course in the expense of hiring pickers for the olive harvest from Father Sylvain (Maurice Chevalier), the local priest. Hoping to cut expenses, Hank buys four monkeys, and teaches them how to pick olives. While the plan looks good on paper, it doesn't go over well with the town's farm laborers -- who threaten a strike if Hank doesn't get rid of his new help. Hank also has troubles with his new work force when he discovers that his monkeys are all female, and the arrival of a male chimpanzee takes their minds off the olives. Monkeys, Go Home! features Maurice Chevalier in his final screen role; the supporting cast also includes Yvette Mimieux and Jules Munshin.

Peter Camlin
as Cabinetmaker
View All

An amusing, light-hearted and pleasant motion picture for the entire family.

Fun for kids. Some laughs for adults. Typical Disney fair.