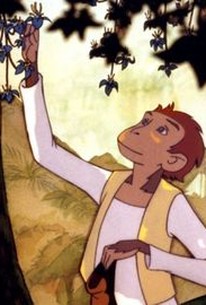 A team of writers and artists from France, Great Britain, and Germany came together to create this animated fantasy about a monkey who unwittingly confronts the fears and superstitions that have held back his kind. In a lush jungle untouched by human civilization, monkeys are divided into two tribes -- the Woonkos, who live in the trees, and the Laankos, who live on the ground. Many years before, all the monkeys lived together, but a great flood separated them into two factions, and after the passing of several generations, no one remembers that they once lived in peace. The Woonkos believe that the monkeys living below them are demons, while the Laankos consider the tree-dwelling apes to be dangerous savages who must be executed if they are ever captured. Kom (voice of Matt Hill) is a free-spirited Woonko who doesn't put much stock in the tales of the demons living below, and one day, while swinging on a vine near a canyon, he falls in and is captured by a group of Laankos. The King of the Laankos (voice of Michael York) becomes curious about the invader, and asks that Master Martin (voice of Michael Gambon) examine Kom before he is put to death. Kom is certain that he is surrounded by demons at first, but as he adjusts to his surroundings, he is impressed with the Laankos' more advanced society -- and he becomes quite fond of Gina (voice of Sally-Anne Marsh), a servant working in the king's compound. A Monkey's Tale also features the voice talents of John Hurt as the devious Chancellor Sebastian and Rik Mayall as the buffoonish Gerard; top-selling British pop group Westlife contributed the film's theme song, "We Are One."

Michael York
as The King

Rik Mayall
as Gerard the Gormless

There are no critic reviews yet for Monkey's Tale. Keep checking Rotten Tomatoes for updates!

There are no featured reviews for Monkey's Tale at this time.