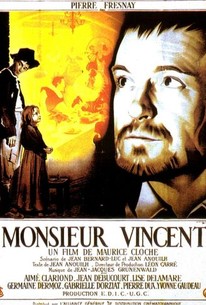 Pierre Fresnay stars as St. Vincent De Paul in this reverent but realistic French biopic. The film traces "Monsieur Vincent's" progress from his days of forced servitude in Algiers to his entry into the priesthood, culminating with his Herculean efforts on behalf of the ill and destitute in early 17th-century France. Featured in the huge cast are Aime Clairimond as Cardinal de Richelieu and Germaine Dermoz as Queen Anne of Austria. Made under the most trying of conditions over a two-year period, Monsieur Vincent remains the chef d'ouevre of director Maurice Cloche. The film won France's Grand Prix award in 1947, and the following year was honored with Hollywood's "best foreign picture" Oscar.

Michel Bouquet
as Consumptive
View All

Set in the 17th century, this French bio-drama, which won the 1948 Best Foreign Language Oscar, revolves around a man who devoted his life to the poor and was canonized by the church.

This movie put a lump in my throat by the end because you really become close to this generous generous man. The movie gives you lots to think about. One idea particularly stuck with me- Monsieur de Paul has just realized some truths about the lives of the poor he has vowed to help and goes to a younger fellow priest to enlist his assistance. Monsieur de Paul says (in French with English subtitles so I paraphrase), "You can't worry about saving the souls of the poor. You have to help them live a life worthy of a soul first." That's profound to me! Compassion and pity are not the same and Monsieur Vincent struggles with feeling pity quite a bit it seems. However, you can't help thinking that this man, who served the poor, sick, and abandoned, started something worthwhile! Claude Renoir was the cinematographer. Other than him, there are not too many people in the cast and crew who became very well known outside of France. Still it is a very special film that is not by one of the famous auteurs.