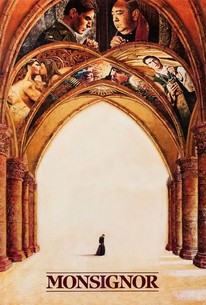 An ambitious priest discovers that honoring the Ten Commandments isn't as easy as he imagined in this drama. Father John Flaherty (Christopher Reeve) is a Catholic priest who was ordained during World War II, and soon found himself forced to fight enemy forces while serving as a chaplain in the Army. As his life and career in the church moves on, Flaherty finds himself frequently torn between his duty and devotion to the church and his ambitions, appetites, and the notion that the ends can justify the means. Flaherty eventually rises through the church hirarchy to win an appointment at the Vatican, where he helps to manage the church's finances. When the Vatican's books reveals a major cash flow crisis, Flaherty suggests a rather unusual plan to Cardinal Santoni (Fernando Rey) -- buy hard-to-find American goods at a discount, and then sell them at a profit to mafia kingpins, who will then sell them on the black market at premium prices. As Flaherty and Santoni debate the ethics of this scheme, Flaherty meets and finds himself becoming attracted to Clara (Genevieve Bujold), a postulant nun. Posing as an American businessman, Flaherty romances and seduces Clara, until she discovers his secret. Monsignor also stars Jason Miller, Robert Prosky, and Joe Patoliano.

Ritza Brown
as Maid of Honor

Franco Angrisano
as Priest
View All

[A] mean-spirited film that might be considered sacrilegious were it not so ludicrous.

Lots of potential for a rare, absorbing, behind-the-scenes look at the Vatican is totally blown.

Monsignor manages to make itself the most extravagant piece of Hollywood junk since Mommie Dearest, for which the producer Frank Yablans and the director Frank Perry were also responsible.

This wretched melodrama, set against a backdrop of altars, papal blessings, and promiscuous priests, has all the content of an empty chalice.

There are no featured reviews for Monsignor at this time.