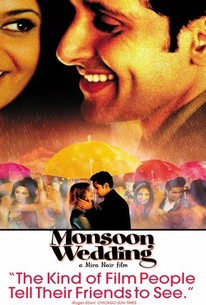 Following up on her controversial erotic drama Kama Sutra: A Tale of Love, Mira Nair directs this charming family drama about a very chaotic Indian wedding. Lalit Verma (Naseeruddin Shah) is a wealthy father who is trying to see that his daughter Aditi's wedding goes off without a hitch. Though familiar with Western ways, he has little patience with them and is dead set on seeing the nuptials done properly and traditionally. Disillusioned with her long time relationship with Vikram -- a man who is almost twice her age -- Aditi (Vasundhara Das) suddenly agrees to submit to an arranged marriage with Hemant, an engineer from Houston. Yet as the ceremony nears, she gets cold feet and returns to see her former lover -- even though it could spell disaster for everyone involved. Meanwhile, Aditi's comely 17-year-old cousin Ayesha is coming to terms with her blossoming sexuality and has her sights set on Rahul, another relative who is a college student in Australia. Then there is Rai -- also Aditi's cousin -- who has a shocking revelation to make. This film was screened at the 2001 Toronto and Venice Film Festivals. At Venice, Monsoon Wedding won the prestigious Golden Lion award. ~ Jonathan Crow, Rovi

Rajiv Gupta
as Cop No. 1

Shubro Bhattacharya
as Cop No. 2

Ambar B. Capoor
as Photographer

Renuka
as Woman in the Rain

It gave the Hindi film industry an alternative way of portraying the Big Fat Indian Wedding, and all its non-stop accompanying tamasha....

This drama by Mira Nair has been hailed as a feel-good spree, but it's better than that-a barely stable compound of the wounding, the confusing, and the appealing.

There is the madness of a family wedding, there's a disturbing secret and there is also a snapshot of India at that moment in time. This is a film that doesn't date.

A late radical shift in tone, from jittery exuberance to ruinous alienation, strikes an impressive contemporary note amid all the obeisance to custom.

A big, galloping party movie in which the party in question is a clear metaphor for the world.

Nair's stereotype-shattering movie -- like the polymorphous culture it illuminates -- borrows from Bollywood, Hollywood and cinema verite, and comes up with something exuberantly its own.

This is a fleet, gentle movie, and I enjoyed it...

The film is an ode to love, in all its messiness and bliss.

Nair confronts cultural conflict and taboos many times, which are explicitly shown in shockingly frank and revealing ways.

Mira Nair's most colorful and most fully realized film

Not content to merely direct traffic of intersecting characters, Mira Nair never lets the scurrying ensemble lag or their stories flag. "Monsoon Wedding" is one of the most culturally savory, joyously exotic comedies since "Strictly Ballroom."

A slow-burn that by the end, has you completely enraptured - it's unfortunate that this film doesn't seem to be seen as more than a love story, there's really a lot going on here. The way the film gets past arranged marriage and works its way into love is simplistic but beautiful, and the low-class love story is also incredibly charming, but perhaps most importantly, this film may have cast the mold for the "Family Secret Revealed In Stress Of Wedding Movie." The subplot with the eldest cousin and the uncle might be the strongest aspect of the film, and it adds a crushing reality to the supposed beauty of a wedding. If you liked Rachel Getting Married or Margot at the Wedding, look back to this film: it broke the ground, and more than that, it will take you away to India for an hour or two. Good for a lot of reasons.

Good story set in India about a large family and their daughter who is to have an arranged marriage. This is one of the more positive stories of that scenario - not what you normally see, where someone is being forced to marry and is unhappy. There is still plenty of trauma here, so don't let that put you off - it is not a normal romantic wedding movie, although there is some romance in it. I found this one very hard to put in a box as it is quite unique. Beautiful to look at also, I loved all the beautiful orange flowers that seemed to run a theme through this. It also shows a lot of India. It is a little hard to get into at first, but it is worth it, and the Bollywood style singing is at a minimum, so actually quite enjoyable when it does happen. Give it a go!

Fabulous in the sense that it paints a wonderful palette of dynamics in an Indian family. It's not too culture-centric so the mainstream can appreciate it too, the conflict is serious but not too heavy, and you can feel the love just seeping throughout each crack. "Rachel Getting Married" without the psychosis. I kinda wish there were songs though. Just because it's Indian.

Given how long I've heard folks talk about this one, I can't quite understand why I've never seen it, but I'm very thankful I finally did. Beautiful! Multiple love stories that all work well together. A great look at one culture's approach to the whole wedding ceremony. I'm now definitely in love with Tillotama Shome : ) Alice, you knock me out.

The only thing that's a half-star jarring for me, is the child predator angle. I mean, I think the film works without that. This is a must-see.