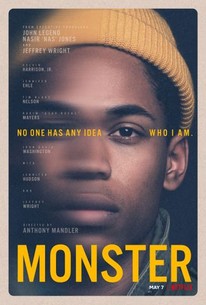 Monster tells the story of Steve Harmon (Kelvin Harrison, Jr.) a seventeen-year-old honor student whose world comes crashing down around him when he is charged with felony murder. The film follows his dramatic journey from a smart, likeable film student from Harlem attending an elite high school through a complex legal battle that could leave him spending the rest of his life in prison.

Jonathan Coyne
as Karyl
View All

Three years is a long time, especially these days, but even in 2018, reviews of the film balked at its gloominess and distracting filmmaking. It has not aged well.

Despite some shortcomings though, "Monster" remains a worthy watch if just for Harrison's performance.

It's harrowing in its believability alone. If only it were a better movie.

The film arrives with a timely theme and a cast whose stock has soared in the intervening time, making this one for the time capsule if nothing else... It's just that the movie adds up to less than the sum of its parts.

The film attempts to discuss race and identity politics and the way young Black men are perceived by the system, but its point is constantly obscured by the path it takes to get there.

Some American critics have complained that this distances us from the film's emotional core, but with a genre that's as ancient and overdone as the courtroom drama this acknowledgment of storytelling mechanisms seems smart and long overdue.

Harrison Jr. gives a powerful performance as a young man who finds his worldview shattered by betrayal, insecurity, anger, fear, doubt, and guilt.

The pacing of the film is a bit fractured and was frustrating at times but director Anthony Mandler handles the screenplay with an honest lens. "Monster" may not be the easiest watch but it is very much worth it.

This drama may start from a familiar premise, but it quickly evolves into a thought-provoking, suspenseful, and skillfully acted drama.

With an over-abundance of courtroom dramas and social justice pieces in today's cinematic landscape, we really didn't need another. Then again, with a message that continues to be so chronically relevant some three years after its debut, perhaps we did

Monster is a movie that should be studied, debated, and, most importantly, watched with bated breath.

There are no featured reviews for Monster at this time.